Best Events of June 2013 in Tuscany 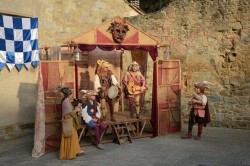 The coming of warmer weather and longer days stimulates a desire for countryside outings. If you’re short of ideas, Tuscany provides a great choice of festivals, events and mediaeval celebrations in June. Here are some of the best ones. Just check our choises!

You can slip into the past, with musicians and dancers, jugglers and swordsmen, knights, jesters and falconers. If you like good food, you mustn’t miss the local dishes! Weapons, costumes and authentic commemorations of combatants: the final battle is one of the most evocative, thanks to a reconstruction of the firing and sacking of the town.

The Cherry Festival, one of the oldest in Tuscany, takes place on the last weekend in May and the first weekend in June, and is the best opportunity to taste the sweet red fruit in all of its traditional varieties, with a varied but intense flavour, during a festival still held in keeping with tradition and folklore. 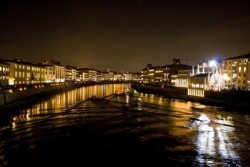 One of the finest shows in all of Tuscany and perhaps the world! Over one hundred thousand candles are set in glasses hung in wooden frames, which are shaped so as to simulate the shape of buildings, bridges, churches and towers overlooking the Arno, while other candles are set on the current of the river itself, creating a dynamic play of light to celebrate the city’s patron saint, St. Ranieri. To top off the evening, fireworks will be set around 23:30.

The afternoon of June 17th is dedicated to the celebrations of Pisa’s Patron Saint Ranieri. Four boats representing the 4 ancient town districts compete in a Regatta on the River Arno – the so called Regata di San Ranieri, heritage of the past glory of Pisa as an ancient maritime republic. The fibreglass boats have 5 fixed seats with 8 oarsmen, a steetsman and a climber. The distance covered is 1500 metres starting upstream from the Ponte della Ferrovia (the Railway Bridge), the finish being in front of the Palazzo Medici along the Lungarno Mediceo. 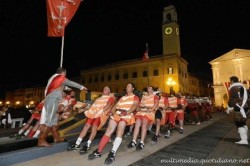 Battle of the Bridge

This historically evocative event, called Gioco del Ponte – the Battle of the Bridge, consists of two distinct but equally significant moments: the historical processione along the River Arno, which is a huge military parade and the Battle on the Ponte di Mezzo, during which the two opposing teams give proof of their physical strenght in a strongly competitive atmosphere.

Regatta of the Ancient Maritime Republics

The Regatta is preceded by agreat parade of 320 pepole (80 for each Republic) which evokes the characteristics, the events and the characters of the history of these four ancient maritime cities, which during the Middle Ages ploughing the seas with their fleets prospered and spread their culture throughout the Mediterranean by means of their military and commercial dominion. 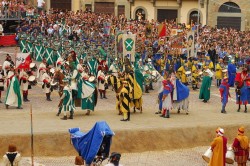 An impressive medieval game in which a rider with a spare tries to hit an armour-plated dummy, with outstretched hands and rotating around its own axis. However, only a few manage to hit accurately and to avoid the strike of the rotating dummy, to hold the spear or to remain in the saddle. Giostra del Saracino – is an extraordinary spectacle, a centuries-old city festival that leaves an indelible impression, involving both citizens and the guests of the city.

Concerts under the Tower

Six evenings of classical music and jazz standards to be held in the courtyard of the Museo dell’ Opera of the Duomo of Pisa. The setting created by a few hundred people in the simple and relaxing architecture of the cloister of the Museo dell’Opera, with the Leaning Tower of Pisa and the summer sunsets in the background, make for an extremely pleasant listening platform, with melodies ranging from jazz to classical and chamber music. 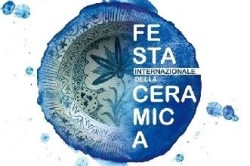 The town, founded as a small “castrum” at the gates of Florence, owes its success to the production of majolica. In particular between the 15th anc early 16th century, when it became the center of ceramics production for the Medicis and other nobile Tuscan families.

The Chianti region, known for its charming scenery, will hold the first edition of the Chianti Tango Festival. This is an event which joins the delight of the Argentine tango with the beauty of a unique area in the world. Enchanted Medieval villages, parish churches and castles which overlook geometric vineyards, ancient cellars, craft shops and the nearness to Florence, Siena and Pisa make it a big touristic attraction. 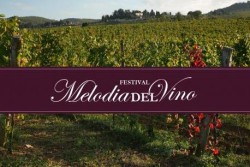 The natural beauty of the land, a supreme taste sensation and the genius of great musical artists are the elements forming the three supporting columns of the third edition of the Melodia del Vino Festival, the cultural event, offering tastings and concerts taking place in some of Tuscany’s most stunning locations. The calendar of alluring events will guide visitors on a magical tour through wines, colours and landscapes, promising performances by renowned artists in places of indisputable reputation.

St. John is Florence’s patron, and what better way to celebrate his holy day than with a violent Renaissance version of soccer played in 16th-century costume? Two teams of 26 men battle each other tooth and nail on dirt-packed Piazza di Santa Croce. The season opens on June 16, but the big game is on June 24, after which fireworks explode over the Arno at 10pm. 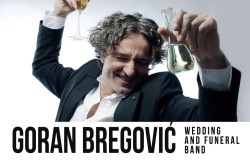 The Marea Festival is an event that takes place usually the last week of June and the first of July in Fucecchio, in the province of Florence. Since 1995 the festival became very important event for the local people, able to attract year after year, countless spectators. The Marea Festival is aimed primarily at young people, with a program that ranges from concerts to theater performances, from debates to the presentation of various sports disciplines, through exhibitions and art installations of various types. This year you can enjoy the concert of Goran Bregovic Wedding and Funeral Band.