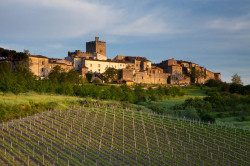 Chianti Guide continous with Castellina in Chianti. It is one of the four historic towns producing Chianti wine, located on atop a hill, between the valleys of Arbia, Elsa and Pesa. The origins of the town are very ancient as shown by the Etruscan necropolises just outside the centre. Later it came under the Florentine control and constantly suffered from the battles between Florence and its greatest enemy Siena. Castellina in Chianti, many times destroyed and rebuilt, preserved only a small part of the defensive walls, which are now transformed into the Via delle Volte tunnel, full of shops and restaurants.

The main objects of the old centre are Palazzo Banciardi and Palazzo Squarcialupi. Inside the latter palace there is the historic Antiquarius Enoteca (English: the Antique Wine Repository), a shop that stores the very best wines of the region for over a hundred years. You can also visit Museo Archeologico del Chianti (English: the Archaeological Museum of Chianti). The wonderful Medieval Fortress “ Rocca di Castellina” that dominates the city and is today the seat of the Town Hall , is the main site of interest thanks to the spectacular atrium, the council chamber, the Sala del capitano ( Captain’s hall) , the courtyard and the medieval well.

And on hot summer afternoons you can refresh yourself at the ice cream parlour Antica Delizia that is proud of its home-made ice cream.