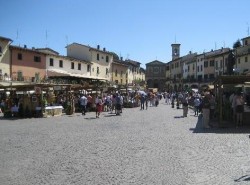 Many Italians call the town of Greve in Chianti as the gateway to the Chianti area. It is situated between Florence and Siena, near the wine road, called Chiantigiana. As well as villages and towns in the Chianti area, Greve admires people with its extraordinary atmosphere.

The history of Greve in Chianti is inseparable from Castello di Montefioralle (English: the Castle of Montefioralle) that was established in 13th century. Due to its exclusive geographical position – it is in the crossroads of three particularly important roads (pilgrimage roads, Chiantigiana and roads to Valdarno and Val di Pesa) – the town has grown bigger and a triangular market square appeared in its centre, where, starting from the 16th century, every Saturday a big market of livestock and foodstuff took place. Nowadays, not only markets but also wine tastings and celebrations take place on this same square.

One of the most exciting places of the square is Antica Macelleria Falorni (English: The Ancient Falorni Butcher’s Shop), founded in the 1729s and existing even today, selling traditional local pork products. Meanwhile, Bottega dell’Artigianato (English:Crafts Store) specialise in products made in olive wood. There is also the statue of Giovanni da Verrazzano, the famous explorer who discovered the bay in New York. One of the most famous bridges in New York City, connecting Staten Island and Brooklyn, where usually the famous New York City Marathon begins, is named after this eminent Tuscan man.

Chianti would not be Chianti if it did not have anything special for wine lovers – Museo del Vino (English: the Wine Museum), where you can taste almost 200 varieties of wine. The museum exposition displays many ancient wine-making tools, as well as 180 different corkscrews.

It is equally necessary to visit the charming Montefioralle, the small fortified village, situated near Greve in Chianti, located on the top of a hill, at about 2 kilometres from Greve. It is the birthplace of the famous explorer and discoverer Amerigo Vespucci. One of the houses has the coat of arms with a wasp on its front door – it is a sign of the Vespucci family.

Every year, during the second weekend of September, all producers of ‘Black Rooster’ wine, the symbol of the Chianti Classico DOCG, present their products in the main square of Greve in Chianti. Each winery has its own exhibition stand for the presentation of their wines and other local products such as olive oil. It is possible to taste the wines by purchasing a particular glass at the entrance of the event. The cost of this glass is 15 euros and allows you to taste 8 different wines. During the wine festival there are several related events organized such as art exhibitions and concerts.