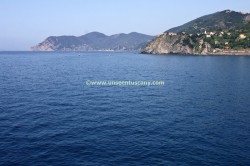 Cinque Terre (Italian: the Five Lands) – a place where not only those who like easy climbing in the mountains, but also those who love good seafood cuisine, wine, boat trips, walks around small towns, sun, swimming in the azure sea and a pink evening sky, will find what to do. 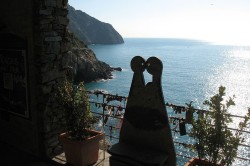 So what are these five lands? It is quite a small area in Liguria, not far from the northern Tuscany, bordering with the crystal clear Mediterranean and mountains rising up to the sky. There are five small villages, stretching over about ten kilometres – Riomaggiore, Manarola, Corniglia Vernazza, Monterosso. You can go the distance between them in three ways – by train that stops in every village; by boat that does not wharf only in Corniglia; or travelling on foot through slopes along the sea shore. This path is known as Sentiero Azzuro or the Blue Plath that has existed since the Middle Ages. Other paths winded above in the hills, through forests, vineyards and ran into the local churches-monasteries. 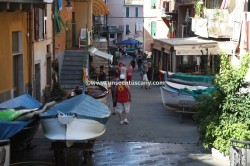 The first stage of the trip through the Five Lands starts at Riomaggiore and is called ‘Via dell’Amore’ (English: The Way of Love). It is the easiest way, which is flat and wide. This walk goes along the sea and there are plenty of hearts, locks, promises of the eternal love and many other tourist attractions. This first stage ends at the Manarola train station, from where you will have to go through a tunnel to reach the town itself. 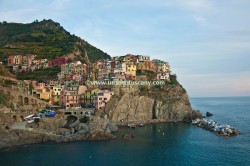 Manarola was founded by the Romans, who left the Volastro town, located farther away from the shores, and moved to the coast. The central street of Manarola, where local residents ‘moors’ their boats, is the most charming. And the best place to have a look at the village is Punta Bonfiglio. UnseenTuscany.com suggests you spending at least a half of a day in Manarola and to explore not only the central part of the village, but also to go up the narrow streets, as well as to go down to the rocky access to the sea. And finally, you should come down Via Belvedere path, take a rest on the bench and enjoy the view of the sea.

The second stage, Manarola-Corniglia, is also easy; the trail has very little hillsides and slopes, it is wide and its protective fences create an impression of a simple two kilometres walk: on one side there are vineyards located on the mountain slopes, on the other – the sea and a refreshing breeze; an hour of this light stroll runs quickly. However, at the end of the route, you will have to climb 382 steps (you will be welcomed with a sing: ‘Congratulations! You have just climbed 382 steps have arrived in Corniglia’ on the top). The village was set up by the Romans and was named after Cornelius (Corneliu), a local white wine maker. Here you will be charmed by the small narrow streets and wonderful views of the sea from a high cliff. This is the village that has no access to the sea. 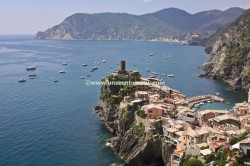 Further the trail leads from Corniglia – the town of cats to Vernazza. It is four kilometres of a track, winding on slopes, which is no longer such flat and straight. The first kilometre goes through olive groves, later the rocky track is surrounded by cacti… Slopes change hillsides, so usually the number of those, who are determined to overcome this way easily, starts to decrease. However, those who surmount this stage are greeted by the tower of Doria castle that stands on the edge of rock, and later on – by Vernazza, protruding into the sea. Looking at it makes no trouble to imagine the 1080s, when Vernazza was surrounded by fortifications and was mentioned in written sources for the first time (at that time the attacks of Saracens was the primary danger). A magical Medieval spirit is still felt here.

Vernazza amazes visitors with its labyrinth of narrow streets and steps, and good food. The last-mentioned, unlike food in the rest of the Five Lands, has preserved deep historical traditions even today. Here, fresh seafood is just peerless: anchovies, breams, cuttlefish, scallops, shrimps, octopuses, squids are dominant almost in all dishes. Everything is very simply prepared: local spices, olive oil and nothing more. 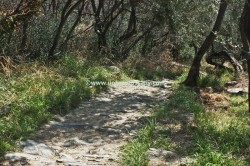 Those who are still determined to go further from Vernazza to Monterosso start off a track going through an olive grove and a vineyard. The trail is obstructed by a few tiny streams, flowing down to the blue sea from the height of several hundred meters. An easy beginning does not mean an easy ending… The distance of the following three kilometres is perhaps the most difficult to make: there are a lot of steep hillsides, the track immediately narrows to a thin seam along the edge of the hill, rare shades tempt to sit down on stones and take rest for hours. However, the surrounding views compensate all hardships – Vernazza stretching to the sea, white yachting sails going towards the horizon, the sun setting in the evening, the chirp of cicadas and Monterosa emerging in the distance. 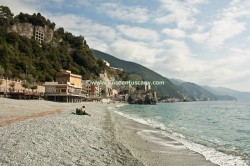 The way to Monterosso goes down the stairs, winding along lemon trees and the fields of grape, located in the mountain slopes turned into small terraces. As well as other villages of the Five Lands, Monterosa counts long centuries of existence, dating back to the 13th century when the locals, defending against attacks, built here fortifications, the ruins of which are seen even today.

A few words about wine. It is worth trying Cinque Terre and Sciacchetrà. The first one is a delicate, pale yellow colour wine, ideal with fish dishes, vegetables and typical focacce bread. The second one is the most famous and the most popular regional wine, golden-yellow or amber colour, quite consistent, sweet and therefore most suitable for desserts. Interestingly, the grapes grown in this area are left to dry for about three months, then crushed and only after that wine is produced – that is where the name comes from (Italian: schiacciare – to crush).