Food and Wine of Elba 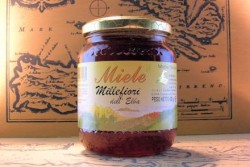 Elba is an island with stunning beaches and beautiful inland areas. The nature of Elba Island is worth your attention, but not only that. Food and wine of Elba are delicious and various. Discover more about it! Chestnuts. Chestnut trees have been grown on the island’s verdant mountain slopes since the late fourteenth century and chestnuts–either fresh, dried or ground down to chestnut flour–have been a fundamental part of the local diet for centuries.

Mushrooms. Over two hundred species of mushrooms grow all over the island’s characteristic oak woods. Among the most interesting species found are the “porcino” and the “ovulo”.

Honey. Elba has honey in many different flavours and varieties. Chestnut honey, eucalyptus honey, rosemary honey—the different varieties are limitless and each one has a special Mediterranean island aroma. 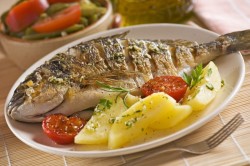 Fish. The Elba diet is largely based on fish and seafood dishes that are flavoured with local spices. The sea around the island is a protected area and so the island’s fish is guaranteed to be of the best quality—both good for the environment and good for your health!

Bread and Cakes. Some of the most famous bread and cakes from Elba are “Schiaccia Briaca”, “Corolli”, “Pane Dolce del Marinaio”, “Cantuccini alle mandorle”, “Cantuccini all’anice”, “Schiacciunta”, “Pane Ferettato” and “Frangette”. One of the most interesting breads on the island is “sportella”, a bread that lovers would traditionally exchange at Easter time to increase fertility. 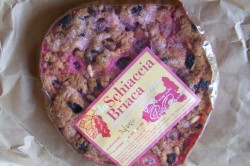 Schiaccia Briaca. Elba was invaded by Saracen pirates many times from the thirteenth to the sixteenth centuries. During this time, it was also ruled by Spanish lords. We find echoes of these foreign influences on the island in a traditional sweet bread, called “Schiaccia briaca” (drunken bread). It is a kind of sweet flat bread topped with pine nuts, raisins and dried fruit, which has an Oriental flavour. It used to be made for sailors to take to sea, as the lack of yeast and animal fat meant that it kept for a long time. Since the nineteenth century, Aleatico red wine has also been added to the bread, giving it its distinctive burgundy colour.

Elba Aleatico D.O.C. Elba Aleatico has a characteristic aroma which is both strong and persistent: there is a clear scent of underwood, rose and black cherry. The flavour is soft and velvety, the sweet taste at the beginning turns into a persistent taste of black-cherry, fruit and dried fruit.

Elba Ansonica D.O.C. Bright straw color with some green highlights. Full fragrance of flowers and herbs, with lush notes of apple and pineapple fruit on the palate.

Elba Bianco D.O.C. remains a good wine even after two years, if preserved in a cellar with a controlled temperature. It is best tasted with fish dishes, starters and delicate soups.

Elba Rosso D.O.C. has a ruby red colour, red wine aroma and a full and dry flavour. It is ready to drink during the first year but improves even more after three or four years. 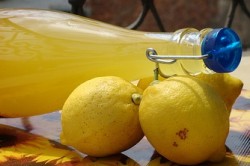 Liqueurs. Since antiquity on the island it has been a tradition to make homemade liquors with alcohol and the citrus fruits from the area of Sant’Andrea. Still today, Limoncino and Arancino are made using the same recipes and are the result of an alcoholic infusion, with water, sugar and lemon or orange peel. These kind of liquors, thanks to their sweet aroma, are perfect as a ‘digestivo’ a the end of a meal or served with desserts. Other typical Elba liqueurs are: Crema di Limoncino, Ciliegino and Liquore di Mortella.

Grappa. Grappa is a type of brandy obtained through the distillation of fresh fermented marc. When the grappa is made from the marc of only one species of vine, it takes the name of that certain vine; while if various types of grapes are used then a name will be created especially. Elba grappas are all produced from Elba vines and most of them are distilled on the island.

Most Beautiful Towns of Elba

What to eat in Elba island. An expert’s choice

Top things to do in Elba island (part I)