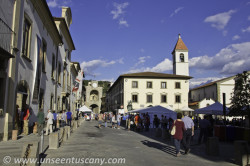 Tuscany is one of those Italian regions, where sagre, various food fairs, wine festivals and open cellars are almost a daily routine. Many villages, towns and cities from early spring to late autumn invite to taste simple traditional dishes made by locals. But this time we are not talking about sagra, but the first FOODSTOCK food and wine festival, that took place in the town of Pontassieve near Florence, on 13-14th of September. FOODSTOCK food and wine festival is really different from the usual food fairs.

Firts of all, FOODSTOCK surprised and charmed us with a simple but brilliant idea – to give a chance to everyone to taste plates, prepared by the famous Tuscan cuisine chefs. There were eight cooking shows held by well-known chefs Marco Stabile, Tommaso Cintolesi Christian Borch, Mario platforms, Cristiano Tomei, Angelo Chimenti, Claudio Vignali and Maria Probst. One of the most charming things, all those cooking shows were held in temporary kitchens on the streets, squares and even over? the bridge built in 1547 of Pontassieve. During the shows the chefs shared their experience with a public and after all the food.

We tasted this wonderful fresh plate prepared by Marco Stabile with very special Ruffino red wine “Riserva Ducale” dated 2001. FOODSTOCK food and wine festival gave an unique opportunity to taste Ruffino wine and to visit the company’s factory which is usually closed for visitors. In 1877 when cousins Ilario and Leopoldo Ruffino established a small winery in the town of Pontassieve near Florence. As word grew about the quality of Ruffino’s wines, the winery flourished, and Ruffino soon began to export its wines to the United States and other countries. Ruffino wine was the first Chianti imported to the U.S. We visited the winery with Global Brand and Corporate PR Manager Francesco Sorelli that proudly showed to us the very unseen part of the facility and the company latest hot items, like the re-invented flask.

But don’t think it was the end FOODSTOCK food and wine festival! In two days of the festival there were street food stands and wine tasting on the main square of Pontassieve, live music, local artisans and hand made products, stores remained open until late night. On the occasion of FOODSTOCK in Pontassieve was organized an photo exhibition “Food in the world” of the photographer Eugenio Bruschi, which presented street food in Africa, Australia, Asia and South America.

FOODSTOCK food and wine festival, promoted by Comune di Pontassieve, Cavolo a Merenda and Ruffino, was like a fresh wind after hundreds of similar Tuscan sagra and food fairs, so we hope to see you there next year!