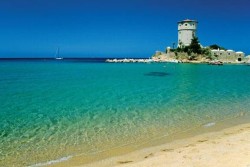 Isola del Giglio (English: Lilly‘s Island), a tiny island with only 1,500 residents, is situated about 15 km from the Tuscan coast. The island very often is called the little paradise of the Tuscan Archipelago – unspoilt nature and mild climate, perfect for active recreation throughout the year. The Tuscan Tourism Comitee decided in 2015 to promote Giglio Island as a new recreation spot, so do we. Here is the first part of the Giglio Island Guide.

Giglio Porto is a village with the population of only 600 people. The village is located on the eastern coastal side and hosts the main harbour of Giglio Island and important seaside resort. Among the sights of the village – church of Santi Lorenzo e Mamiliano (20th century); the Tower of Saraceno, built during the Middle Ages and restructured by Cosimo I de’ Medici in the late 16th century; the Tower of Lazzaretto, completed in 1624.

Giglio Castello is located upon a hill in the centre of Giglio Island, between the villages of Giglio Campese and Giglio Porto, and it is the municipal capital of the comune with about 550 inhabitans. It is an ancient medieval borough characterized by the majestic walls of a fortress. Main sights of the village are: church of San Pietro built in 12th century and completely restructured in 1755 in a Baroque style; walls of Giglio Castello are old fortifications which surround the village since 12th century. The most impressive and interesting sight of Giglio Castello is Rocca Aldobrandesca castle, built by the Aldobrandeschi family in the early Middle Ages and then restructured by the Republic of Pisa in the 13th century.

Giglio Campese is the smallest of three villages with only 150 people living there. Giglio Campese is located on the north-western coastal side of Giglio Island and about 5 km from Giglio Castello. It is an important seaside resort. It is worth to see Tower of Campese, built as a coastal defense tower by Cosimo I de’ Medici in the late 16th century. 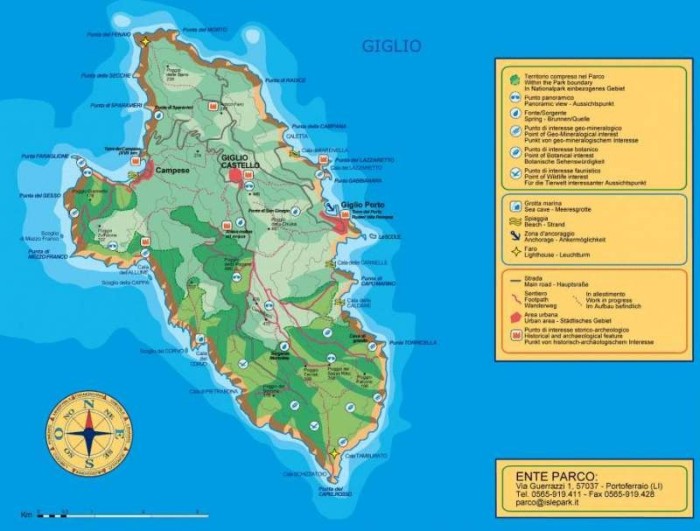 Villa del Saraceno. In Giglio Porto near the tiny Cala Saraceno bay, there are the ruins of a natural pool used as an ornamental fishpond, and the ruins of a Roman villa of the 1st and 2nd century A.D. belonging to the Domizi-Enobarbi family, who were related to Emperor Nerone.

Nave oneraria romana. The remains of a Roman ship used for commercial transport was found in 1962 only 100m away from the red wharf (Molo Rosso) of Giglio Porto. Together with the ancient ship, many African amphoras of the 3rd century A.D. were found.

Faro del Fenaio. The maritime lighthouse of Fenaio is located in the northern part of the island of Giglio. It was inaugurated in 1883 and still operating.

Faro di Capel Rosso. The maritime lighthouse of Capel Rosso lies at the southern end of the island of Giglio. It was inaugurated in 1883 and still operating.

Open cellars. The last weekend of September features an important and popular event – the Festival of Grapes and the Open Cellars in the village of Giglio Castello. During the festival it’s possible to taste local Ansonaco wine and typical dishes of the island.

San Lorenzo feast. The feast of San Lorenzo, the saint patron of Giglio Porto, is celebrated on the 10th of August. Celebration last for several days with different entertainments, the most interesting among them is the traditional “Palio Marinaro”, or boat race, in which the three districts of the town are represented by teams of 4 rowers and 1 coxswain each that compete with specially constructed boats.

San Rocco feast. Patron saint of Giglio Campese, San Rocco is celebrated on the 16th of August with fireworks, parties and concerts in the main square and on the beach.

Festa della Castagna. In october in in Giglio Castello chestnut festival is celebrated.