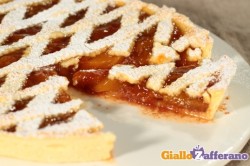 A crostata is an Italian baked tart and a form of pie. It has been known by various names throughout Italy, including coppi in Naples and sfogliate in Lombardy. Historically, it also referred to an “open-faced sandwich or canapé” because of its crusted appearance, or also a chewet, a type of meat pie.

There are endless variations of both sweet and savoury crostata, the sweet ones usually served as a dessert. Sweet variations use fruit preserves as a filling, typically apricot, cherry, peach or nectarine, or berries. The crostata can also be blind-baked and then filled with pastry cream (crema pasticcera) topped with pieces of fresh fruit; this is called crostata di frutta.

A warm and sunny sunday we invite you to enjoy an italian peach crostata. The recipe we have got from signora Marusca from Cecina town on Tuscany coast. According to her – crostata is one of Tuscany’s most popular home-made sweets. This cake is very easy to made, so lets try.

• In a mixer add the flour, butter from a refrigerator and a pinch of salt. Stir until the mass becomes loose.
• Put the resulting mass on the table, form a “hill”, add the sugar on the top. Make a hollow in the middle, and inject it into the eggs.
• All knead by hand until a homogeneous mass. If a mass is to dry, add a little bit of water.
• Shape the pasta into a cylinder, wrap it in foil for the food and leave for at least half an hour in the refrigerator.

• Remove the pasta from the fridge, divide into four parts. Use three of them to form a flat round basis and cover with it a baking pan so that the edges reach the top. Prick dough with a fork.
• Spread the peach marmalade on the pan (about 100 gr.) and set sliced peaches in circles on the pasta. Spread on top of the rest of the marmalade.
• Roll out the remaining dough and cut into strips. Arrange the strips on the cake so to get the grille.
• Bake in a preheated 180 C oven for about 50 minutes.