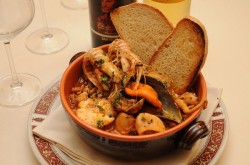 A new rubric in UnseenTuscany.com – ‘Sunday Recipe’ invites you to make a tour of Tuscan cuisine. Each week we will present to you the most popular recipes and tell you the stories and traditions related to them. We will start from the coast and its most famous dish.

And the most remarkable dish of Tuscan coast is cacciucco or cacciucco alla livornese (English: cacciucco or Livorno-style cacciuco).

It is said that cacciucco epitomises a versatile soul of Livorno, the Mediterranean port city. This city was the seething cauldron of different nations – Jews, Armenians, Greeks, Germans, Portuguese, French, English and Dutch; there was a variety of cultures, religions and culinary traditions, as well as a diversity of ingredients used in cooking (cacciucco – a soup of assorted sea fish, shellfish and molluscs, poured over the toasted bread) and many stories.

According to Federico, there is a number of versions and myths surrounding its creation. One of them says that cacciucco was invented by the keeper of the lighthouse of the port, when the representatives of Florentine Republic, who ruled Livorno, prohibited the use of oil which he used to fry his fish (the oil was used to fire the lighthouse). Hereby cacciucco appeared – a dish requiring almost no oil in preparation.

Meanwhile, according to another legend, one Livornian fisherman found himself in a storm and drowned, leaving his wife and children without a breadwinner. The little one, suffering hunger, decided to go to the port and to ask fishermen to give away the leftovers of their catch. Most fishermen had pity on starving orphans, so some of them gave small fish, others – shrimps, mussels, octopuses and other sea creatures. Their mother cooked a soup of all that and added some bread. This way cacciucco was invented.

The origin of dish name also proclaims the fact that cacciucco is rooted in a mixture of culinary cultures of many nations. It bears resemblance to the Turkish word ‘küçük’, which means ‘tiny pieces’ – small fish and molluscs were used to prepare the dish.

Truly, says Federico, cacciucco was introduced few centuries ago by coastal fishermen, who found a way to use the unsold fishing catch. Cacciucco reminds a fish soup typical of the region, but the utmost difference is the bread put into the dish. It is said that cacciucco in Tuscany, is like paella in Catalonia.