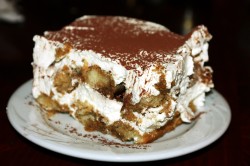 Probably there is no trip to Italy which ends without tasting the famous italian sweet Tiramisù. The origin of tiramisù is shrouded in a mystery, so more than one Italian region – Tuscany, Piedmont and Veneto – are saying they are the birth place of tiramisù. Of couse there are many legends, and one of them tells that tiramisù was invented by Sienese pastry chefs in the late 1600s to honor Grand Duke Cosimo III De’Medici, who was known for his sweet tooth.
The story says the Sienese developed the dessert for the Duke on the occasion of a State visit, and initially called it Zuppa del Duca, or Duke’s Pudding. The zuppa was a terrific success, especially among courtesans, who found it both stimulating and aphrodisiac, and thus enjoyed it before trysts; with time they took to calling it tiramisu, or pick me up. Subsequently, the story goes, tiramisu spread to Venice and the Veneto, where it remained a local treat until it suddenly gained national popularity in the late 70s. 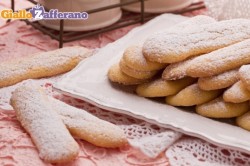 • Carefully separate whites from yolks.
• Beat yolks with 3 tbsp of sugar in a large bowl, add mascarpone, mix with a blender on low speed until the mass is homogeneous and creamy. Clean the blender.
• Whisk the whites with the remaining sugar with a blender in a medium-sized bowl until little peaks are firm enough not to fall (like for meringue); carefully incorporate the white mixture into the mascarpone mix.
• Quickly dip each Savoiardi into the coffee and lay out in a single layer at the bottom of a large baking pan (glass works best, as it allows to see the layers). Cover the fist layer with half the cheese mixture. Lay another layer of dipped Savoiardis on top and cover with the remaining mascarpone mix. Put the cocoa in a small sieve and dust the top of the cake.
• Decorate with choco chips or chocolate shavings.
• Refrigerate overnight or for 4-5 hours before enjoying. Buon appetito!