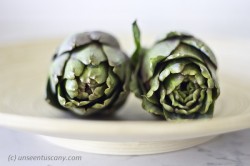 The artichoke is a perennial plant native to the Mediterranean region. The naturally occurring variant of the artichoke, the cardoon, which is native to the Mediterranean area, has records of use as a food among the ancient Greeks and Romans. In North Africa, where they are still found in the wild state, the seeds of artichokes, probably cultivated, were found during the excavation of Roman-period Mons Claudianus in Egypt.

The total antioxidant capacity of artichoke flower heads is one of the highest reported for vegetables. Studies have shown artichoke to aid digestion, liver function and gallbladder function, and raise the ratio of HDL to LDL. This reduces cholesterol levels, which diminishes the risk for arteriosclerosis and coronary heart disease.

In Italy, artichoke hearts in oil are the usual vegetable for „spring“ section of the „Four Seasons“ pizza (with olives for summer, mushrooms for autumn, and prosciutto for winter). A recipe well known in Rome is Jewish-style artichokes, which are deep-fried whole. Stuffed artichoke recipes are abundant. A common Italian stuffing uses a mixture of bread crumbs, garlic, oregano, parsley, grated cheese, and prosciutto or sausage. A bit of the mixture is then pushed into the spaces at the base of each leaf and into the center before boiling or steaming.

Today we want to present you a very simple recipe of artichoke in roman style, called Carciofi alla giudìa, literally „Jewish-style artichokes”. It is among the best-known dishes of Roman Jewish cuisine. The recipe is essentially a deep-fried artichoke, and originated in the Jewish community of Rome, giudìo being the Roman dialect term for Jew. It is a speciality of the Roman Ghetto, where it is served by Jewish restaurants in spring-time.

Artichokes of the Romanesco variety, which are harvested between February and April in the coastal region north-west of Rome, between Ladispoli and Civitavecchia, are the best for this dish.

The artichokes are cleaned with a sharp knife, eliminating all the hard leaves with a spiral movement (see the photos below). They are then beaten together to open them. They are left for some minutes in water with lemon juice, then seasoned with salt and pepper and deep-fried in olive oil. The last touch consists in sprinkling a little cold water on them to make them crisp. At the end they look like little golden sunflowers and their leaves have a nutty crunchiness. They are eaten warm.