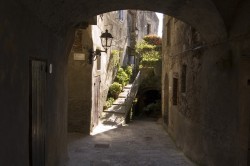 Capalbio is an ancient village surrounded by the Maremma countryside. Inside the medieval walls you can “feel” the old atmosphere of the past centuries; walking through narrow streets, little squares and old walks will bring you back to the past.

In the surroundings of the charming Capalbio in Maremma is the impressive Tarot Garden built by Niki de Saint de Phalle in the second half of the last century. The Garden displays the huge and beautiful sculptures by the French artist which depicting the 22 Major Arcana of the Tarot cards.

Nature lovers and bird watchers will be in paradise from the moment they enter Burano Lake Nature Park, which is only a short drive from Capalbio. The lake is home to a variety of salt water fish species including the mullet and sea bream, as well as ducks, cormorants, marsh harrier, crested cuckoo and other local birds.