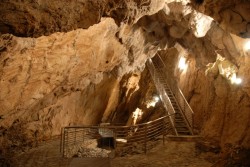 Equi Terme is a small village in the Lunigiana, north of Tuscany. The village is known for its caves, thermal waters and wonderful nature. If you are visiting Apuan Alps and their famous marble quarries, come to Equi Terme and enjoy its treasures! Lunigiana Equi Caves and thermal baths are waiting for you!

The Equi Caves Cultural Park is located in the centre of Equi. It is a wide subterranean karst complex, created during the centuries by the water erosion, with passages, grottos stalactites, galleries, chambers, stalagmites, pools and underground lakes. On the other side of the Fagli river, there is the Equi Caves Museum, created in an old water mill, which gives evidence of the presence of primitive peoples in this place.

The Lunigiana Equi Caves system extends for more than 1000 meters and may be subdivided into three parts. The first one is called “Buca“. It was outfitted for excursions in the early 1960s. The second one is called “Grotte”. Here you can find a series of linked halls and chambers adorned with an infinite variety of natural mineral formations. The third and last part of the complex is not open to the general public and is accessible only to speleologists.