Most famous movies set in Tuscany 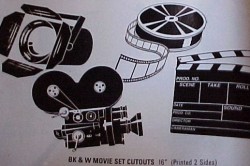 Tuscany has always been one of the favorite sets for many films. Such locations as UNESCO World Heritage sites Florence and Val d‘Orcia, then Arezzo, Mediterranean sea coast and Apuan Alps became filming sites of the most famous movies. Here is our list of Most famous movies set in Tuscany from 1996.

Gladiator is a 2000 American-British epic historical drama film directed by Ridley Scott, starring Russell Crowe, Joaquin Phoenix, Connie Nielsen, Ralf Möller, Oliver Reed (in his final film role) and others. Crowe portrays the fictional character, loyal Roman general Maximus Decimus Meridius, who is betrayed when the emperor Marcus Aurelius’s ambitious son, Commodus, murders his father and seizes the throne. Reduced to slavery, Maximus rises through the ranks of the gladiatorial arena to avenge the murder of his family and his emperor.

Movie set in Tuscany: the fields caressed by Russell Crowe in the Gladiator are just below the walls of Pienza.

Quantum of Solace is the twenty-second James Bond film produced by Eon Productions, and is the direct sequel to the 2006 film Casino Royale. Directed by Marc Forster, it features Daniel Craig’s second performance as James Bond. In the film, Bond seeks revenge for the death of his lover, Vesper Lynd (Eva Green), and is assisted by Camille Montes (Olga Kurylenko), who is plotting revenge for the murder of her family. The trail eventually leads them to wealthy businessman Dominic Greene (Mathieu Amalric), a member of the Quantum organisation, who intends to stage a coup d’état in Bolivia to seize control of that country’s water supply.

Movie set in Tuscany: some important scenes of the movie were setted in Carrara, Siena and Torre di Talamonaccio.

The Twilight Saga is a series of five romance fantasy films from Summit Entertainment based on the four novels by the American author Stephenie Meyer. The films star Kristen Stewart, Robert Pattinson, and Taylor Lautner. The series has grossed over $3.3 billion in worldwide receipts and consists, to date, of five motion pictures.

Movie set in Tuscany: some important scenes of the movie were setted in Volterra, within the streets and alleys of its fourteenth century historical center.

Hannibal is a 2001 American crime thriller film directed by Ridley Scott, adapted from novel of the same name by Thomas Harris. It is the sequel to the 1991 Academy Award-winning film The Silence of the Lambs and returns Anthony Hopkins to his iconic role as serial killer Hannibal Lecter. Julianne Moore co-stars, taking over for Jodie Foster in the role of U.S. Federal Bureau of Investigation Agent Clarice Starling.

Movie set in Tuscany: the film’s locations alternate between Italy, mainly in Florence, and the U.S.

The English Patient (1996) is a romantic drama directed by Anthony Minghella from his own script based on the novel of the same name by Michael Ondaatje and produced by Saul Zaentz. The film’s invocation of fate, romance, and tragedy unfolds in World War II Italy through the story of a burn victim, a once-handsome explorer whose sacrifices to save the woman he loves spell his end.

Movie set in Tuscany: the Tuscan location are located in Arezzo and Pienza. The monastery where The English Patient was cared for by Juliette Binoche is set at Sant’Anna in Camprena just a few miles outside of Pienza.

Life Is Beautiful (Italian: La vita è bella) is a 1997 Italian tragicomedy comedy-drama film directed by and starring Roberto Benigni. Benigni plays Guido Orefice, a Jewish Italian book shop owner, who must employ his fertile imagination to shield his son from the horrors of internment in a Nazi concentration camp. Part of the film came from Benigni’s own family history; before Roberto’s birth, his father had survived three years of internment at the Bergen-Belsen concentration camp.

Under the Tuscan sun

Under the Tuscan Sun is a 2003 American romantic comedy drama film written, produced, and directed by Audrey Wells and starring Diane Lane. Based on Frances Mayes’ 1996 memoir Under the Tuscan Sun, the film is about a recently divorced writer who buys a villa in Tuscany on a whim, hoping it will lead to a change in her life.