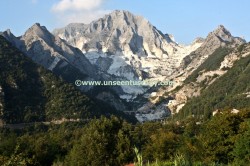 Alpi Apuane (English: the Apuan Alps), extends in Massa Carrara and Lucca provinces. Since time immemorial, perhaps the most valuable marble in the world is mined out in the Apuan Alps and its scenery attracts many lovers of nature. It is because of their extraordinary beauty, these mountains are sometimes referred to as Lunae Montes, i.e. the Mountains of the Moon. So the journey through Tuscany is not simply a tour around cities known as the cradle of art, medieval villages and verdant vineyards – it can also be a reckless adventure in the mountains of Alpi Apuane.

In geological terms – Alpi Apuane is a true paradise for speleologists and most of interesting places are accessible to tourists (such as Grotta del Vento or Amtro del Corchia). Alpi Apuane mountain range is seamed with footpaths and tracks: some of them are really complex, whereas others are adapted for the whole family. So what can you do in Alpi Apuane? 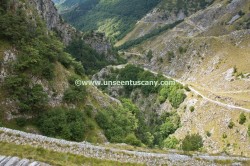 Those who want to recreate in the open air intensely, to breathe fresh air, to see villages sleeping at downhill, to listen to the silence, interrupted only by a goat chime – Alpi Apuane mountains really have much to offer. Plenty of simple and some more solid physical preparation requiring routes will help not only to have a rest, but also to learn the north Tuscany. From ‘Via Vandelli’, the old road from Modena to Massa, ancient trade and marble roads, to bridges and crossings inducing adrenaline, castles and mysterious caves. Alpi Apuane is waiting for you!

Via ferrata (English: iron road) is mountain trails, equipped with special ropes, steps, handles, ladders and bridges. These trails allow true fans of mountaineering to overcome those mountain stretches that would otherwise be insurmountable. First via ferratas were built in the area of the Dolomites in the north of Italian Alps during World War I, in order to facilitate the movement of infantrymen in mountains. However, such paths can also be found in the Alpi Apuane massif: La ferrata di Foce Siggioli, La ferrata del Sella, La ferrata del Monte Forato, La ferrata del Pratomagno, La ferrata del Contrario. 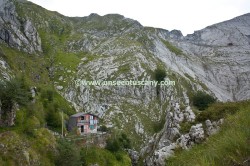 The Alpi Apuane massif is rich in historical, religious, artistic and natural heritage and attractions. In the area, called the Lunigiana, you can get acquainted with the history of the ancient Etruscan city of Luni and to see the remains of the Roman amphitheatre. Grotta del Vento tempts with its caves of stalactites and stalagmites. Lago Santo – a lake and its surroundings, full of forest goods and scenic trails. Santuario de ‘La Verna’ is a temple, inviting pilgrims and astounding not only by its splendour, but also by the beauty of surrounding nature. And it is only a small part of all interesting sights!

Another original way to get to know the territory is travelling by horse. Most of these opportunities are in Garfagnana area, there are special routs adapted for this entertainment. Horse riding in Alpi Apuane is possible all year round. The most popular routes are: La via del sole, Le vie del marmo, La via degli altopiano, La via del parco, La via del Serchio, La Via delle Panie.