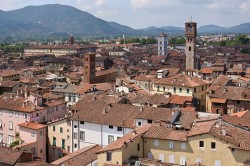 Lucca is one of those towns in Tuscany you should visit on your vacation in Italy. You might choose to stay there or nearby to use it as a base for exploring the region but, even if you don’t, you can still visit it on a day trip. Lucca is famous for its Renaissance-era city walls that have remained intact while so many other Tuscan towns saw theirs destroyed in past centuries. Lucca is located on a plain at the foot of the Apuan Alps and is less than half an hour from the Tuscan coast and an hour from Florence. What t see and what to do in Lucca? Here is our list.

The Torre Guinigi is the most important tower of Lucca, the symbol of the city. Its main characteristic is its hanging garden on the roof of the tower. It’s possible to climb it, but there is no elevator, only 230 steps! But it‘s really worthy.

The Amphitheatre square was reconstructed between the 1830 and 1839 by Lorenzo Nottolini, a prominent architect and urbanist working for the Borbons. The work resulted in an integrated square basing on the old structure of closed Roman amphitheatre – maintaining its disposition, closed elliptical form, the number of entrances, and the motive of a continuous arc – the characteristic elements of the Romanesque architecture. 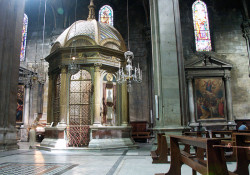 Construction was begun in 1063 by Bishop Anselm (later Pope Alexander II), but the current version of the cathedral is the 3rd rebuilt of this church. The cathedral holds a very important Catholic relic: the “Volto Santo” or “Santa Croce,” the Holy Cross which – according to the legend – was miraculously found to be sculpted by Nicodemus, the same man who helped Joseph of Arimathea deposit Christ’s body in his tomb. 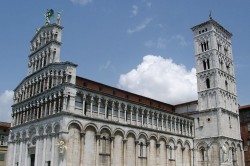 San Michele in Foro church is built over the ancient Roman forum. Until 1370 it was the seat of the Consiglio Maggiore (Major Council), the commune’s most important assembly. It is dedicated to Archangel Michael. Amongst the artworks in the interior, are a Madonna with Child terracotta by Luca della Robbia and a panel with Four Saints by Filippino Lippi.

The construction of Palazzo Pfanner dates back to 1660. It was the Moriconi family, members of the Lucca merchant nobility that commissioned its building. Now the Residence of Palazzo Pfanner, the only part of the Palazzo which currently can be visited, contains a large reception hall with frescoes painted around 1720 by Pietro Paolo Scorsini, belonging to the so-called ‘quadraturismo’, some lateral rooms with a vast set of period furniture, furnishings, sacred objects and a splendid 14th century wooden statue depicting the Archangel Michael. The Residence has a permanent exhibition of medical-surgical instruments and ancient medical texts that belonged to Dr. Pietro Pfanner (1864-1935), the surgeon, philanthropist and mayor of Lucca from 1920 to 1922.

Giacomo Puccini was born in Lucca, Italy, on December 22, 1858. Puccini spent his childhood in Lucca and the city embraces him as a favorite native son. The native house of the famous opera composer has been restored in the style of the mid-nineteenth century and made into a small museum that is open to the public. 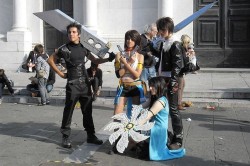 Lucca Comics and Games is an annual comic book and gaming convention in Lucca, Italy. It takes place, usually, at the end of October. Launched in 1966, the event grew in size and importance over the years. It began in one small square in the center of Lucca, then in the 1980s was moved to a sports center outside the city walls. In 2006, for the 40th anniversary, the fair was moved back to the city center, with numerous tents and pavilions arranged in different squares within the walls of this medieval city. With 217,646 visitors in 2013 (included the press, guest and organization 264,454 visitors), it is the second most popular comic fair in Europe (after the Angoulême Comics Festival in France) and the third in the world (the first is the Comiket in Tokyo, Japan).

The Lucca Summer Festival is a music festival which held in Lucca during the month of July since 1998. On the stages of the Lucca Summer Festival showed performances bands and soloists of national and international like Bob Dylan, James Brown, Mark Knopfler, Jamiroquai, Seal, Sugar, Ray Charles , Eric Clapton, Elton John, Anastacia, Giorgia or Ennio Morricone. The Dave Matthews Band July 5, 2009 he held a concert in over three and a half hours, the longest performance of his career. 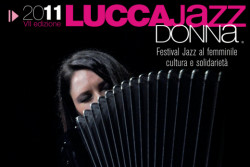 Lucca Jazz Donna is a women jazz festival held in Lucca from 2005. Lucca Jazz Donna is a festival dedicated to the female figure; the frequency is annual and its purpose is to identify, select and enhance the woman in jazz singing, composition and adaptation, the use of various instruments and musical styles.