Sagra, or the best local food festivals in Tuscany 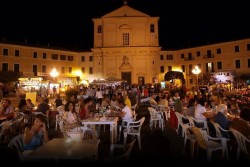 In Italy, mostly in central regions like Tuscany, Emilia Romagna or Lazio, a sagra (pl. sagre) is a local food festival. The various sagre or local food festivals almost always have their origins in old country fairs, sport events or similar entertainments. The sagre are organized and celebrated by the local people so the tourists can feel the real atmosphere of the countryside feast.

The sagra, or local food festivals in Tuscany, is often dedicated to some specific local food, and the name of the sagra includes that food. For example, you can find a Sagra della Rana (frog), a Sagra della Cipolla (onion), a Sagra della Cozza (mussel), a Sagra del Cinghiale (wild boar) and so on. Usually it is organized in the outdoor, like the stadium or the square. The food is cooked by the local people on site.

How do the local food festivals in Tuscany work? When on site, first you need to take a menu and write down you order (put the quantity next to the dish name), then go to the cash to order and to pay. Then one of the staff members will show you the table and will take your order, probably at the same table with the local people. Very often your order arrives all together, so don‘t be surprised or don‘t complain – it‘s sagra, not a restaurant!

Our team created the list of the best local food festivals in Tuscany. Our best choices are (before going please check the dates!) :

Sagra delle Ciliegie (cherry festival) in Lari. Cherry festival in Lari is one of the oldest and most popular local food festivals in Tuscany, counting almost 60 editions. The festival is held in the medieval center of Lari. Must try dishes: crostini misti (mix of starters), grigliata di carne (mix of grilled meat) and different types of sweets with cherries). Held in May.

Sagra della Paella (paella festival) in Buti. Even if paella is nor Italian neither Tuscan dish, sagra in this small and charming town is worth your attention. The town reminds remote magic place, and the food is very tasty. Must try dishes: paella, sangria. Held in July.

Sagra della Zuppa (soup festival) in Massarella, Fucecchio. The festival is one of the historic Tuscan sargras. Must try dishes: different types of soup. Held in July.