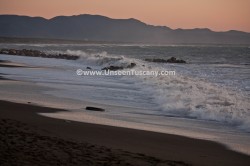 Tuscany has a western coastline on the Tyrrhenian Sea, containing the Tuscan Archipelago, of which the largest island is Elba. Tuscany has an area of approximately 22,993 square kilometres. The Tuscan Archipelago is a chain of islands between the Ligurian Sea and Tyrrhenian Sea, west of Tuscany, Italy. The archipelago contains the islands of Gorgona, Capraia, Elba (the largest island of the group), Pianosa, Montecristo, Giglio, and Giannutri; all of which are protected as part of the Tuscan Archipelago National Park. The islands’ proximity to several major cities has made them a favourite tourist location. History and literature have ensured that most people are familiar with the islands of Elba and Montecristo. Last but not least, don’t miss out the best Tuscany beaches!