The Tuscan Archipelago is a chain of islands between the Ligurian Sea and Tyrrhenian Sea, west of Tuscany, Italy. The archipelago contains the islands of Gorgona, Capraia, Elba (the largest island of the group), Pianosa, Montecristo, Giglio, and Giannutri, all of which are protected as part of the Tuscan Archipelago National Park. The islands’ proximity to several major cities has made them a favourite tourist location. History and literature have ensured that most people are familiar with the islands of Elba and Montecristo. 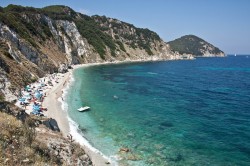 We will definitely not exaggerate saying that Elba is a tiny paradise of Tuscan coast. Crystal clear water, golden sand, rocks poking out of the water, extraordinary stories and legends hovering in the air – all this is Elba. It is an oasis of peace for those, who want to run away from the city noise and asphalt. Here you wake up in the morning with the singing of the birds and the sun shining brightly, you can enjoy tiny beaches, sunsets, good food and friendly locals.

Elba is the third largest island in Italy and the largest island of the Tuscan Archipelago. The island is connected to the mainland by a daily ferry service (the distance between Elba and Tuscany is about 10 kilometres), it takes about 40 minutes. The island has approximately 35 thousands of inhabitants, most of them live in Portoferraio, the main town of the island, which is a port to most of the ferries. Although Elba is quite small, covering an area of 200 square kilometres, it offers a multitude of diverse landscapes – romantic fishing villages, small towns on rocky hill-tops and green valleys, resembling jungles. The highest point on the island is Monte Capanne (1019 m). 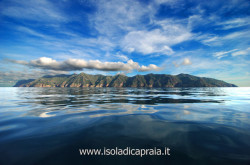 Capraia – is the most remote isle of the Archipelago and is closer to the island of Corsica than Italy. The island received its name from wild goats (Italian: capra – goat), which once lived on this island, but there is also another legend saying that the name has changed over time, and the first one ‘Carpa’ meant a rock, because the island resembles a small rock from a distance.

Capraia has been known since ancient times – the Phoenicians, the Greeks, the Etruscans and the Romans have all inhabited the island once. In the Middle Ages the island was ruled by Saracen pirates, later it passed into the hands of Pisa and finally it was taken over by Genoa. But the story does not end here, because until the beginning of the 19th century the island belonged to Corsica, France and England. Since 1989, Capraia is the part of the Tuscan Archipelago National Park.

Tourists willingly visit Capraia, many ferries come here from Livorno port… Capraia is a wild and uncontaminated island. There are almost no signs of civilisation, so nature lovers, divers, fishermen will really appreciate it. The coasts of the island are rocky and colourful. Moving to the southern part of the island, you can find the traces of a long-forgotten and extinct volcano. 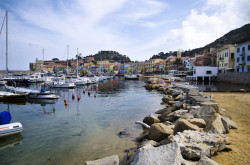 Giglio (English: Lilly) is situated at a distance about 15 km from the coast of Tuscany. It is a tiny island with only 1,500 residents. The island is called the little paradise of the Tuscan Archipelago – unspoilt nature and mild climate, perfect for active recreation throughout the year. The most popular activities found on the Giglio Island are bird watching and diving.

As well as many other Tuscan islands, Giglio has been known for many centuries. It was once inhabited by the Etruscans and the Romans and later it belonged to Emperor Charlemagne. Over the years, during the turnover of owners, the island fell into the hands of Pisa and its dwellers built a castle here. In the 16th century, Giglio belonged to the Medici family from Florence that seized the entire Tuscany at that time. One of the most interesting facts is the attacks of Saracen pirates and the threat of one of the most famous pirate captain Khair ad-Din, known as Barbarossa. The islanders, tortured from the fear of the latter, built defensive towers on the shores of the island. Since the 19th century, the island was taken over by peace and tranquillity, the number of population began to grow and, after the opening of granite mines, the boost of economy started. And now the only business of the island is tourism.

The nature of the island is surprising – granite cliffs, lush vegetation and even rare species can be found here. Giglio also boasts about its excellent sandy beaches and clear blue waters. And one of the main attractions is an ancient castle. 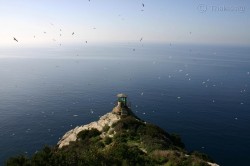 Gorgona is the smallest of all seven islands of the Tuscan Archipelago. Gorgona is situated over 37 kilometres away from the shores of Tuscany, but one a bright day you can see its contours from Livorno. There is a ferry going from Livorno to the island once a week. Tourists can visit the island only in small organised groups, accompanied by a tour guide. If you wish to visit the island, you have to notify 11 days prior to your trip and you must provide your personal information to Direzione del Carcere.

Although the island is now a home to approximately 300 people, the proofs of the presence of the Etruscan, the Roman, the Benedictine and the Certosini monks were also found here. Later the island belonged to Pisa and Florence, as well as the Certosini monks. Subsequent attempts to inhabit this island abundantly were in vain.

The centre of the island is a small fishing village. The surface of the island is rocky and the coastline is surrounded by thick wild vegetation. People come to the Gorgona Island very occasionally, so nature here is not polluted and water is especially clear – camping is absolutely banned. The most beautiful wild beaches are Baia dei Gabbiani and Cala Scirocco. Grotta del Bue Marino is proud of numerous swarms of focca, unfortunately – it is a strictly protected area, where access is prohibited for tourists. The island also has the remains of two fortresses, the Pisan and the Florentine. Villa Margherita ruins date back to Etruscan and Roman times. Other attractions – Torre Vecchia of the 13th century, Torre Nuova, Torre dell’Orologio, the church of San Giorgio, the ancient cemetery and a few grottoes. 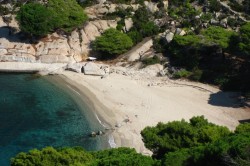 The island of Montecristo reminds us of an excellent novel ‘Count of Monte Cristo’ by French author A. Dumas that many of us read in childhood. So does that mysterious island really exist? A legend has it that a bunch of prisoners, who managed to escape from a prison, came to the island, searching for the treasure hidden in grotto. In fact, the researchers found that the treasure was indeed hidden on the island, but not in the 19th century, but three centuries earlier. In the 1553s the Carsairs, under the leadership of Dragut, attacked the monks, who lived on the island, carried them off into slavery and seized their treasures. Nobody knows where those treasures disappeared but even today many treasure seekers appear.

In this island you can also see the former fortress and the ruins of a water mill. La Villa Reale was built in the 19th century by the commission of wealthy English Lord Taylor. Currently it houses the historical museum of the island. However, it is not so easy to get into this remarkable island for ordinary tourists – primarily due to its harsh granite coasts (the only place where small boats can come is called Cala Maestra and it is the place of the aforementioned Englishman’s villa). The only inhabitant of the island is a married couple. But those, who are still determined to visit this wonderful and absolutely natural corner, can book a one-day trip in Corpo Forestale di Follonica a few months in advance. 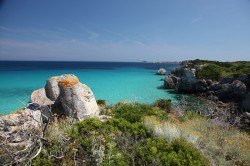 This small island is distinguished by its surface – it is practically flat with the highest point rising only 29 m above sea level. A few years back, there was a prison located in the island, but now it is completely uninhabited. Upon receiving the permission, visitors come here for diving – there is a huge variety of saltwater fish and vegetation. Often dolphins are encountered as well. There are also some ruins of a Roman villa located on the only accessible beach. 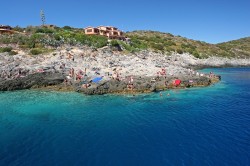 The southernmost island of the Tuscan Archipelago is Giannutri, characterised by its crescent shape. However, it is most known as ‘the island of gulls’, because here you can find the royal Mediterranean gulls. The island has been inhabited since Etruscan times and it is proved by various utensils of different periods and even sunk merchant ships found near the coast of the island. The island has two beaches – Cala dello Spalmatoio and Cala Maestra – the marble remains of Roman villa. Perhaps the most interesting places to visit are the blue water grottoes, stretching along the shore, with the most beautiful one, called Cala dei Grottone.

The island can be reached from Porto Santo Stefano and in summer time – from the Giglio Island. The island is inhabitable, and near the footpath that stretches along the island you can see some private villas. There is a small restaurant Taverna del Granduca, whose owner also rents small houses on the island. 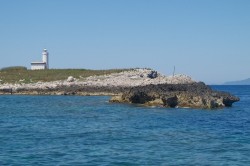 Three tiny patches of land, located about 20 km from the shores of Marina di Grosseto, are called the Grosseto ants. These rocks even have their own names – Grande Formica, Formica Media and Formichino. On the largest of them there is a lighthouse standing lonely. Usually only true diving enthusiasts, who can observe not only the underwater fauna and flora, but also the archaeological findings of the ancient civilizations, come to these islands.