The town of Arezzo is a tiny Tuscan pearl, long since known as Estruscan and later – as Roman settlement. In the Middle Ages the city was independent, often controlled by the bishops, who were residing here. Since the 1384s, it was almost continuously owned by Florence. The old town of Arezzo won renown after the release of the film ‘La vita è bella’ (1997) by the eminent contemporary Italian director Roberto Benigni​​. Some scenes of this unique film were shot in Arezzo central square. The city centre has retained its old spirit and works of renowned Medieval and Renaissance artists Cimabue, Piero della Francesca, Andrea Delll Robbia and Giorgio Vasari in Arezzo delight still the guests of the town. It is Arezzo where one of the most famous poets of all times Francesco Petrarca was born.

One of the first places to be visited upon arrival in Arezzo – is the 13th-century church of San Francesco. One of the most interesting objects in it is the fresco cycle ‘Leggenda della Croce’, painted in 1453-1466 by Piero della Francesca. In Via Cavour street there is Chiesa di Badia, built in the 13th century by Benedictine order and reconstructed in the 16th century by Giorgio Vasari. Take your time before you leave Cavour Street, because it is like a spine of an old medieval Arezzo: there are old buildings Palazzo Bacci, Palazzo Altucci, Palazzo Camaiani, Albergotti, the church of S. Michele and the tower Torre della Bigazza. 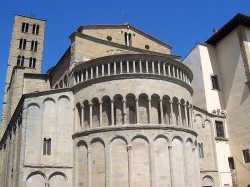 Pieve di S. Maria is considered the most beautiful church in Arezzo and one of the most important examples of Romanesque style in Tuscany. Its construction began in 1140 and the current view is a result of several successive reconstructions. Its Romanesque façade is embellished with a bell tower and inside you will find S. Donato’s relics. Il Duomo, the 16th-century Cathedral of Arezzo, is proud of its surviving stained-glasses of the 16th century, the chapel of Cappella Tarlati and various frescoes.

Piazza Grande, the grand square or the square of Giorgio Vasari – one of the most beautiful and scenographic Italian piazzas, where you simply need to stop, to breathe air filled with history, to take a break in an outdoor café, to have a glass of wine and to slowly explore an unusual shape of the square, the building of Palazzo del Tribunale, the elegant Palazzo della Fraternità dei Laici and Palazzo della Loggia palaces. The latter was designed by Giorgio Vasari. In Via dei Pillay there is Palazzo Pretorio and, supposedly, the native house of Petrarch.

In the XX Settembre Street there is Casa Vasari – the house of Giorgio Vasari, which you definitely must see! Primarily, it is because Vasari (1511-1574) was one of the most prominent architects, artists and biographers not only in Italy, but all over the world. Some of his most impressive works are the 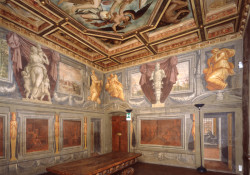 reconstruction of Palazzo Vecchio in Florence, Ufizzi gallery, Vasari Corridor, the monument of Michelangelo’s tomb and many others. However, he achieved fame as a Renaissance genius probably due to his book of biographies ‘The Lives’. Another reason to visit this house – it is an extraordinary interior, designed by the artist himself. Vasari bought the house in 1540, when he finally found some free time in-between his trips to Florence and Rome. On the first floor, there is Sala del Camino (English: the Fireplace Room), surprising visitors by its frescoes that adorn all the walls of the room. Camera della Fama (English: the Hall of Fame) exhibits the portraits of most eminent Tuscan artists and in the frescoes of Camera di Apollo (English: the Apollo Room) Vasari immortalized Apollo, the Nine Muses and the Allegory of Marital Love, where he also memorialised his wife Nicolosa Bacci. Those, who wish to see more masterpieces by Giorgio Vasari, can head to Museo d’Arte Mediavale e Moderna (English: the Museum of Medieval and Modern Art). 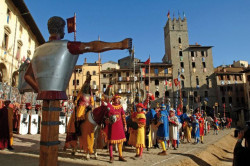 One of the most exciting events in the city of Arezzo – Giostra del Saracino – an impressive medieval game in which a rider with a spare tries to hit an armour-plated dummy, with outstretched hands and rotating around its own axis. However, only a few manage to hit accurately and to avoid the strike of the rotating dummy, to hold the spear or to remain in the saddle. Giostra del Saracino – is an extraordinary spectacle, a centuries-old city festival that leaves an indelible impression, involving both citizens and the guests of the city.

Another event, attracting plenty of visitors – Fiera Antiquaria di Arezzo(English: the Antique Market of Arezzo) that takes place on the first Sunday of each month. On that day over 10,000 square meters are covered with the most interesting, most beautiful and most unusual antiques and lots of traders come from all over Tuscany and neighbouring regions.

One more sight that will certainly be unusual to tourists in the city of Arezzo – Offerta dei Ceri al Beato Gregorio – an ecclesiastical celebration, solemnised on the second Sunday of January, dating back to the 13th century. The story goes that in 1276 Pope Gregory X died in Arezzo and left 30,000 florins for the construction of city cathedral. After 50 years, when the pope was canonised, it was decided to bring candles to his grave as a sign of gratitude and sacrifice. That is when the tradition that still exists was born – a procession of ordinary citizens dressed in medieval costumes carries huge candles to the saint Pope.