The National gallery is the most important museum in Siena. The gallery is located in the building of the 18th century. It houses the collection of 13th -18th century Sienese paintings.

The Renaissance-style Palazzo Piccolino e delle Papesse was built in the middle of the 15th century, commissioned by rich Piccolino family, from which even Pope Pius II was descended. It is worth not only to get an eyeful of perfectly extant Renaissance palace’s facade, but also to stop by Centro per l’Arte Contemporanea (English: the Centre for Contemporary Art) that is located in here.

The palace of Chigi-Saracini is a perfect example of medieval architecture that currently houses the musical academy. So if you linger in Siena for a few days, you can attend some concerts, organised by the academy.

The elegant Loggia della Mercanzia was built near the main city square at the beginning of the 15th century. The loggia contains the statues of saints, reliefs and frescoes. It is said, that once in the place, where the loggia is now located, there was the oldest club for aristocracy in Europe.

Palazzo Salimbeni is a place where one of the oldest European banks – Monte dei Paschi di Siena – was established in the 15th century. The palace is open to the public just at times, usually in October.

Santuario e Casa di Santa Caterina (English: the House and the Shire of St. Catherine)represents real unseen Siena and lately has become a place of attraction for thousands of pilgrims over the years. In the 14th century there was only a small house where St. Catherine used to live. After she was canonised in the 15th century, the Renaissance-style sanctuary appeared in this place. St. Catherine was born in the 1347s in a very large family – she had even 24 brothers and sisters .At the age of six she had her first visions, later she entered monastery and was taking care of the poor and sick. During her visit in Pisa, she received stigmata. Catherine died at the age of 33 and was declared a saint after almost a hundred years. It is a great chance to visit her shrine. 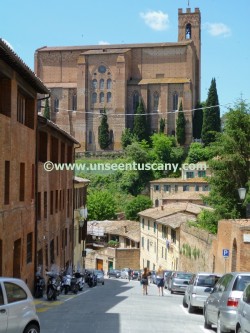 This Gothic Basilica of San Domenico was built in the 13th century. When you are approaching Siena, this basilica stands out from far – this massive shrine of red-brick is located on a hill far away from the centre. It is the place where St. Catherine spent most of her monastic life. Here you can also see her head stored in a reliquary. This is what we call unseen Siena.