Tuscany (Italian: Toscana) – a region in central Italy. It borders Latium to the south, Umbria and Marche to the east, Emilia-Romagna and Liguria to the north. Its west coast is washed by the Tyrrhenian Sea. Tuscany has an area of 22,990 sq. km and a population of about 3,516 million.
The most important cities in Tuscany region are Florence, Arezzo, Grosseto, Livorno, Lucca, Massa, Pisa, Pistoia, Prato and Siena. Up to 10 million tourists from all over the world come to the region each year.

Nature. Hills make up nearly 66,5 percent of Tuscany area, Monte Prado (2054 m) is the highest mountain peak. Although it sounds unbelievable, there are also two dormant volcanoes: Monte Amiata (1738 m) in southern Tuscany and Monte Castello (445 m) on Capraia Island. Moreover, there is the Accona Sesert (Italian: Deserto di Accona) to the south of Siena, covering an area of 150 sq. km.

Spring. Springtime in Tuscany is unpredictable – sometimes the temperature in March may rise up to +20°C and occasionally – just a few degrees above zero. Despite the heavy rainfall, the end of April and May are excellent months to travel around Tuscany and to admire its verdant nature. 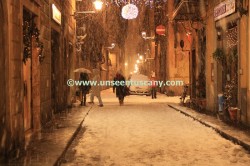 Summer. The hot and dry period in Tuscany starts in the end of June and lasts until mid-September or sometimes even till late October. Tuscan summer is very hot with the average temperature of 30°C and in the hottest days of July the temperature can reach as high as 40°C. The climate of seaside region is milder and mountainous areas delight visitors with fresher air even during the hottest summer days. This is a good time to visit Tuscany.

Autumn. Till mid-October people in Tuscany can enjoy the soft autumn air and later the rainy season starts (in the middle of Tuscany it rains about 80 days per year, mountainous areas has up to 120 days with rain, whereas in the southern part of the region rain continues only for 60 days). The average temperature drops to +15°C but, despite that, there may also occur particularly warm days in October, therefore it is a perfect time to travel.

Winter. The cold season in Tuscany begins in December and lasts until the end of February. This time of year usually brings wet weather, strong and cold winds. In mountain areas snow may occur, while in the rest of the region it is quite rare. Temperatures usually range from 0 to 7 degrees Celsius. The lowest temperature in the region was recorded in January 1985, when the temperature in Florence had dropped down to -23,2°C.

From Etruscans to Italian Republic

A few thousand years ago Tuscany was home to the mysterious Etruscans, who lived on hilltops. Since the 7th century BC, Arezzo, Chiusi, Fiesole, Volterra and many other settlements constituted a federation of independent cities and a defence system. Unfortunately, it was difficult to stand against the mighty Romans and in 351 BC Etruscan territories were annexed.

In Tuscan territory the Romans established major regional cities – Florence, Siena, Pisa, and Lucca and brought in here new technologies. The most notable traces of the Romans are roads and aqueducts that are found even today. However, in the 5th century, Roman domination came to an end, the land was occupied by the Goths, a century later the Longobards appeared and the region became an important transitional point between the north and the centre-south of Italy. One of the major pilgrimage routes in Europe, Via Francigena between France and Rome, was originated.

Due to the famous pilgrimage route, regional situation was constantly improving; new settlers were moving in and starting business here, as wandering pilgrims needed food, shelter and other services. In the 12th century, the conflict of two opposing political factions (papal Guelphs and imperial Ghibellines) set at variances Tuscan cities and people and at the same time gave rise to the strongest. The guilds of Pisa, Siena, Lucca and Florence started textile business, trade and agriculture. Finally, Florence, the capital of culture and banks, became dominating in the region. 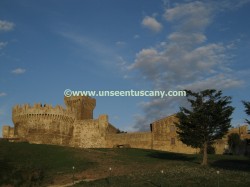 Since 1434 – with several interruptions – the Medici family, one of the richest aristocrats in the continent, who especially supported famous painters, sculptors, architects and writers of that time, entrenched in Florence and throughout Tuscany. In 1537 Cosimo I de Medici became not only the ruler of Florence, but also the first Grand Duke of Tuscany. The era of the Medici ended in 1737, with the death of Gian Gastone, the last male member of the family.

In the 18th century, when the last Medici heir died, Tuscany devolved upon Francesco Stefano of Lorraine and the Empress Maria Teresa of Austria, and became a part of the Austrian Empire. The Augsburg family ruled the region until the middle of the 19th century (with a break of several years during Napoleon’s domination). In 1860 Tuscany became a part of the unified Kingdom of Italy. Florence was the capital of Italy from 1865 to 1871.

Today Tuscany is one of the most important tourist attractions in Italy and the whole of Europe (the city sees 2 million tourists per year) and is considered one of leading centres of Italian textile industry.