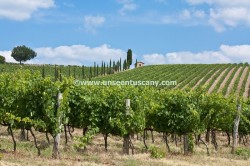 To visit Tuscany and not to taste Chianti Classico wine – it is the same as during a visit to Ufizzi gallery not to take a glance at the ‘Birth of Venus’. Chianti is a very important part of Tuscan history and culture, so it is simply necessary to get acquainted with this extraordinary region, its world-famous wine, wine-making traditions and daily routines.

Information about Chianti Classico wine is already found in written documents, dating back to the 12th century. The documents note that viticulture was developed in 3 villages – Castellina, Gaiole and Radda, which formed the League of Chianti (Italian: Lega del Chianti) to produce and promote this special product. In 1716 the Grand Duke of Tuscany, Cosimo III de’Medici issued an edict, legislating that the above mentioned villages as well as the village of Greve are the only true producers of Chianti Classico wine. The law was in force until 1930s, when the Italian government significantly expanded the territory, however the area determined by Cosimo III even now is considered the classical Chianti region. This region covers an area of approximate 260 sq. km between Florence and Siena that shines out with low rolling hills, green forests and tiny fattoria (English: farm). 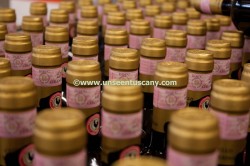 The base of Chianti wine, i.e. from 80% to 100%, consists of Sangiovese grapes without which the world of Italian wines is absolutely unthinkable. According to legend, the name Sangiovese means ‘sanguis Jovis’ or ‘the blood of Jupiter’ – the grapes lay claim not only to ancient origins, but also to relationships with the chief Roman god. And it could not be otherwise – a wine of magical flavour can be made only out of exceptional grapes. Sangiovese is the real soul of Chianti Classico, sensitive to external factors and requiring patience and knowledge from a winemaker. The colour of Chianti wine is a bit darker than ruby, the smell reminds cherries, tobacco, blackberries and blueberries. Experienced wine connoisseurs would also add – as the wine ages, aromas of leather and soil, chocolate, raisins and plums can emerge. Chianti has plenty of tannins and restrained feeling of acid remains even in the wine of well-ripe harvest. 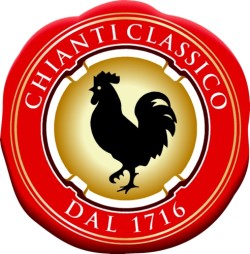 True, a symbol of wine and festival is a bit weird, but it belongs to the consortium of Classic Chianti wine (Italian: Consorzio del Vino Chianti Classico), based in the region, that takes care of the quality of the wine and the promotion of traditional wine-making. And legend says that in The Middle Ages, the citizens of Florence and Siena, tired of continuous struggles for the territory, decided to fix everything in rather unusual way. Two horsemen were chosen – one from Florence, another from Siena – who had to set out at cockcrow from their respective city and the place where they would meet would become the frontier. The Sienese selected a white cock, fed it in the evening and hoped that it would crow early morning, while the Florentines chose a black cock and gave it nothing to eat. Not surprisingly, the latter, suffering from hunger, crowed long before dawn, Florentine rider set out and met his opponent only 12 kilometres away from Siena. As a result, due to the black cock, Chianti region went to Florence and got the symbol at the same time.