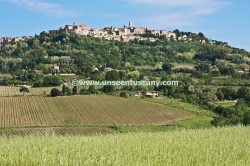 The town of Montepulciano is located in south-eastern Tuscany, near Lago di Trasimeno Lake and A1 motorway that leads to Rome. There are 15 thousand people living in Montepulciano and its surroundings, which boast amazing landscape – high hills, undulating vineyards and olive trees, cypresses rising towards the sky, and when the weather is good, from here you can see the Monti Sibilini mountain range and the extinct Amiata volcano. From Montepulciano you can easily reach Assisi – a Mecca for religious pilgrims, Perugia and Lake Trasimeno.

Montepulciano lures tourists by its wine and the old town with its Piazza Grande – the main town square that is worth a visit, surrounded by medieval buildings (Palazzo Comunale, Palazzo Cantucci and Palazzo Nobili Targhi, Palazzo del Capitano del Popolo). On the outskirts of the square there is Pozzo de’Grifi e dei Leoni – an impressive well. Tourists can also go up on the roof of Palazzo Comunale and take a look at the Montepulciano surroundings from above.

One ancient legend says that Montepulciano was founded by the Etruscan king Lars Porsenna. It is believed that he moved on the hill, referred to as Mons Mercurius at that time, and established a city there that was associated with the wine even in Etruscan times. This was evidenced by an extraordinary finding, called Kylix, i.e. a small wine-drinking cup found in an Etruscan tomb. 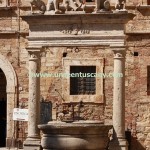 Vino Nobile di Montepulciano is one of the oldest Tuscan wines boasting a long and interesting history. There are some surviving documents, dating back to 1350s, regulating the local wine trade, i.e. the trade of Nobile di Montepulciano. In the 15th century, Pope Paul III used purchased a lot of this wine, and in the 18th century the wine finally received its current name ‘nobile’ (English: noble). This recognition meant only one thing – the quality and a rumour about the noble Montepulciano wine spread even outside Italy – it was described by Voltaire in one of his works and in the last century his admirers included American presidents Martin Van Buren and Thomas Jefferson.

In 1980 Nobile di Montepulciano was given DOCG award (Italian: Denominazione di Origine Controllata e Garantita, i.e. a guarantee that the wine is produced confirming very strict requirements and only in a certain area). 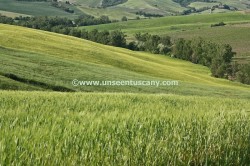 Nobile di Montepulciano wine is made from at least 70% Sangiovese grapes that are called prugnolo gentile in Montepulciano and Canaiolo Nero grapes with no more than 20%. This wine is aged in wooden casks for at least two years. If the wine ages for three years, it remains bottled for another six months and then receives the name Riserva. This wine usually has 13.5% of alcohol. Montepulciano wine has a rich ruby ​​red colour and over the years gains garnet hues. It also has a strong aroma and a dry taste with a flavour of wood.

Since 1998 there is the wine road Vino Nobile di Montepulciano that introduces both Italians and tourists to the territory of Montepulciano, its heritage, villages, nature and, of course, the noble wine.