If you are planning a visit of world‘s renaissance capital, one of the main questions is accommodation in Florence. It‘s not easy to choose accommodation in Florence, the city with such a wide selection of every kind of hotels – from five stars world famous hotels to very basic but cheep hostels and many many options in between. Which one is the best for you and in which part of the city? UnseenTuscany.com team divided the city into the zones and described their main features. Today we will talk about the San Lorenzo zone.

The city center of Florence has been inscribed on UNESCO’s prestigious World Heritage List. But there are many stunning monuments outside the down town, such as San Lorenzo and its surroundings. The Basilica di San Lorenzo is one of the largest churches of Florence, situated at the centre of the city’s main market district called San Lorenzo, and the burial place of all the principal members of the Medici family. It is one of several churches that claim to be the oldest in Florence.

Accommodation in Florence, San Lorenzo zone, has some positive sides. The zone is very near the down town of Florence and the railway station. There are plenty of hotels, apartments and B&B of very various levels and different prices. There are a lot of restaurants, bars, food and souvenir shops.

On the other hand accommodation in Florence San Lorenzo zone has some negative sides, like huge daily open-air market, open from the early morning to the late night. Before you book the room in here make sure that the windows are noise-proof. The other negative circumstance is the safety of some streets in San Lorenzo zone. 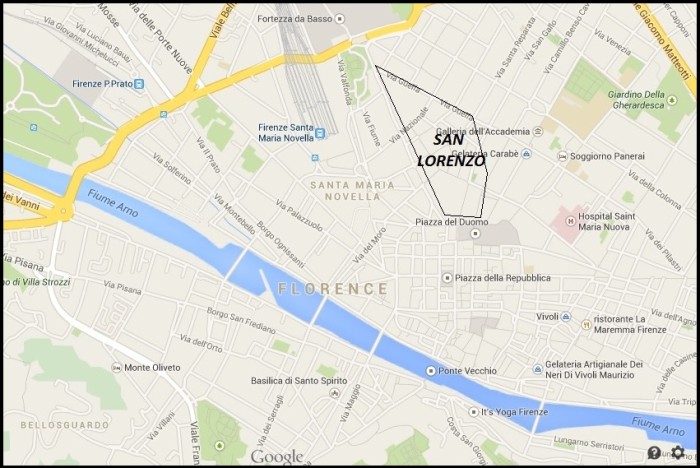