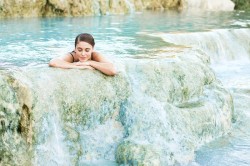 Spas, nature, history and culture here come together, forming a really winning combination, giving you a holiday dedicated to wellbeing and. Tuscany is all this and much more. The ideal destination for autumn and winter holiday where it is more than simple to combine nature, wellness and culture.

CHIANCIANO TERME. In the middle of the legendary valley of Orcia, Chianciano spa resort with mineral water enriched with healing elements, offers great climate and every advantage for tourists. Today, Chianciano Terme is considered among the finest health resorts in Europe with its water, enormous parks and countless, modern hotels. An autunm or winter holiday in Chianciano Terme allows one to enjoy the exceptional cultural values and quality of the environment, the sporting and recreational activities, the good food and use the therapeutic thermal spas.

BAGNI SAN FILIPPO. Historically known for its thermal water Bagni San Filippo is the ideal destination for an intimate and relaxing SPA vacation. The resort Terme San Filippo features a swimming pool Hotel and wellness centre. Exceptional SPA and beauty treatments are offered thanks to the use of all-natural sulphurous water, its sediments and mud. For nature lovers the Fosso Bianco is the perfect place.

SAN CASCIANO DEI BAGNI. The ancient village of San Casciano dei Bagni is famous for its thermal waters, clayey soils and uncontaminated vegetation. The territory reached the peak of its prosperity in the XVII-XVIII centuries; and today the village has rediscovered its ancient thermal treasures and can boast of one of the most prestigious spas in the world, all in a setting of uncontaminated territory and an untouched landscape.

MONTECATINI TERME. Already in 1530 at the foot of Montecatini, baths were constructed and adapted to contain the thermal waters. The area had remained a health hazard due to the stagnant water. Under the pressure of the Grand Duke Leopold, channels for the disposal of water were built and the land was reclaimed. The first bath were constructed in the 18th century: Tettuccio 1779, Bagno Regio 1773 and the Terme Leopoldine 1775. Now Montecatini Terme is one of the most popular destinations in Italy for thermal spa tourism.

MONSUMMANO TERME. Monsummano Terme is an comune located in the Province of Pistoia, Tuscany, and is a popular spa resort with two natural caves: Grotta Giusti and Grotta Parlanti, the latter recently undergoing renovation following the closure.

BAGNO VIGNONI. Bagno Vignoni is a popular tourist destination and well known for its hot springs. Thanks to the Via Francigena these thermal waters were found and have been used since Roman times. During the ages Bagno Vignoni was attended by eminent personalities and artists. Characteristic of Bagno Vignoni, besides the thermal waters, are its structure, essentially unchanged since ages ago. Bagno Vignoni was the location where parts of Andrei Tarkovsky’s 1983 film Nostalghia were shot.

TERME DI SATURNIA. In the heart of Maremman Land, immersed in nature and far from the crowds and stress, Terme di Saturnia is certainly the ideal place to find relax and well-being. Thanks to the beneficial and curative properties of the water, Terme di Saturnia offers priceless moments of peace and relax.

TERME DEI BAGNI DI LUCCA. The thermal waters of Bagni di Lucca are used for therapeutic cures since the ancient times, attracting the attention of chemists, geochemical and geologists specially in the last century. The waters are made up of calium-sulphate.

BAGNI DI PETRIOLO. Petriolo thermal bath are located near the town of Monticiano, in the province of Siena. Its origins is ancient, dating back to 1230, thus Petriolo is the only remaining fortified bath (dated 1404), in fact you can still see the walls. The therapeutic properties of the hot springs were known in the past: Petriolo was attended by many nobles (for example famous Medici and Gonzaga families). Petriolo is very indicated fot those who suffer circulatory disorders.

TERME DI GAMBASSI. The Gambassi Thermal baths in the province of Florence are among the most renowned spas in Tuscany. The facility offers various treatments, including drinking cures, inhalations, massages, mud baths, sauna, and other. There is also a rehabilitation department for patients suffering from Parkinson’s disease, multiple sclerosis and hemiplegia.

TERME DI VENTURINA. The thermal baths of Venturina are like a paradise, few meters from both the city of Piombino and the Mediterranean sea. The thermal waters formerly known as Aquae Populoniae, are rich in sulfur, alkali and earth, and flow from two distinct sources, at a temperature of 36 ° C. The spa extends over an area of about 60,000 m2, where guests can take mud baths, have massages, and other beauty and health procedures, and a large spa pool.

TERME DI CASCIANA. Casciana Terme is a town in the province of Pisa, and lies in the heart of the Pisan Hills. The village is best known for the thermal plant which receives a constant flow of lime-sulfur water at 37 °C (99 °F). At Casciana Terme „Acqua Mathelda” water is used since ancient times, has in recent years seen its applications extended to modern rehabilitation therapies, cardiovascular and respiratory treatment, in the improvement of the digestive functions and their treatment.

TERME DI ELBA. The thermal complex of Terme di San Giovanni which is famous for its highly therapeutic silt with properties unique in Italy and Europe.