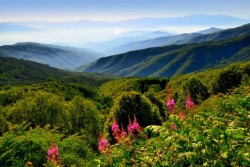 Franciscan Sanctuary of La Verna. La Verna Sanctuary is situated on a high rocky promontory, surrounded by dark forest, but still visible from a distance. It is believed, that the sanctuary was built on the site where Saint Francis received the stigmata. There are now the monastery, church, museum, souvenir shop, chapels, bar and the cave that was Saint Francis’ cell. From the monastic complex are visible breathtaking views of the valley.

Hermitage of Camaldoli. Camaldoli is a place of high spirituality in the middle of the National Park of the Forests of the Casentino Valley. Camaldoli Hermitage is place with an ancient history and rich of art. The actual Hermitage was founded in 1012 by a Benedictine monk San Romualdo. At the Hermitage few places are “must”: the Cell of San Romualdo and the Church with its two characteristic bell towers on the façade. Besides that, Camaldoli holds a farm. It is possible to buy products made in the farm (especially meat and wine), at Villa Mausolea in Soci town.

Church of San Pietro a Romena. The church of San Pietro a Romena is a Romanesque architectural jewel. The church, built in the mid-12th century over a pre-existing edifice, perhaps dating to the 8th century, is dedicated to San Pietro Apostolo. It is flanked by the late-Romanesque baptistery. Notable are the capitals decoration of the interiors. This impressive church is considered one of the most important churches in the area.

Poppi Castle (Castello di Poppi, or the Castello dei Conti Guidi) is one of Tuscany’s most significant works of medieval architecture and tourist attractions. The castle stands in a dominant position atop the little mediaeval town of Poppi. It belonged to the noble family of Conti Guidi. You can visit the whole castle, from the ancient prisons to the belltower and the Rilliana Library, which holds 25,000 ancient books, 800 Medieval manuscripts and over 700 incunabula. www.castellodipoppi.it

Romena Castle (Castello di Romena) is a medieval castle where Dante Alighieri lived for a short time during his exile from Florence. The castle was mentioned for the first time in 1088, and destroyed in 1440 by Niccolò Piccinino’s Milanese troops and later restored under the Grand Duchy of Florence. It was bombed and damaged by the Allies during World War II.

Porciano Castle (Castello di Porciano) dominates its village which overlooks the town of Stia and the Casentino Valley. Ever since the 11th century Porciano was under the jurisdiction of the powerful Counts Guidi. The large palatial tower was built in the 13th century. The Castle of Porciano, now a private property, is the only one of three castles back to life both as a museum and home. www.castellodiporciano.com

Poppi. The ancient medieval village of Poppi is one of the best-preserved examples of “walled city”, surmounted by the majestic castle of the Guidi Counts: also in excellent condition even today.

Bibbiena. The old part of Bibbiena, a medieval fortress, is set at the top of a hill surmounted by the Torre Tarlati. A noteworthy monument is the 16th-century Palazzo Dovizi, named after the renowned family to which Cardinal Bernardo, called il Bibbiena (1470-1520) belonged.

Stia. Inside the town of Stia, whose origins date back to the Roman age, it is possible admire the Porciano Castle, the Church of St. Mary delle Grazie and the Florentine Palagio.

Pratovecchio. Pratovecchio represents one of the historical nucleuses of the Guidi Counts’ power, feudatories of the Empire that dominated the Casentino until the XV century. The village’s origins date back to the Early Middle Ages but the first, definite mention of it is from 1191.

Montemignaio. Montemignaio village rises at an altitude of 739 m above sea level and is overlooked by the Leone Castle, built in the XII century. Also worth a visit is the parish of St. Mary, a Romanesque-style building that conserves the “Madonna with Child and Saints” by Ghirlandaio.