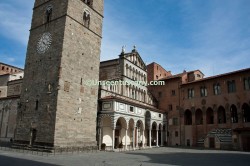 Although Pistoia is located very close to Florence, it very seldom appears in tourist maps and top places of interest, and usually only two facts are mentioned – the endless seed-plots in the surrounding that are seen from highway, and the legend that the word ‘pistol’ is derived from the name of the city. However, the most interesting attractions in Pistoia are absolutely other objects which definitely worth attention.

Pistoia is an old settlement, counting several thousands of years; a site of Gallic, Ligurian, Etruscan dominions, which later was occupied by Romans. In 1177 Pistoians erected powerful walls and elected independent city government. Later, Pistoia became an object of fights between Florence and Lucca. By the way, Pistoia is mentioned by Dante in the ‘Divine Comedy’, whereas Michelangelo apparently was not very fond of this city, therefore he labeled the Pistoians the ‘enemies of heaven’. 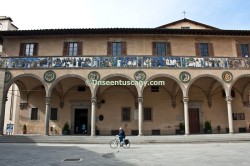 Legend has it that in the middle of one frosty and snowy winter, a tree stump was found miraculously flowered, and in that place the Virgin Mary appeared to the pious husband and wife Antimo and Bendinella, telling them to build a hospital. In 1277 the hospital was actually built in Pistoia, and over the years, due to the donations of local citizens, an inner courtyard, oratory and women’s wards appeared. A part of the hospital, built in the 15th century, remained till nowadays, which is very similar to Florence ‘L’Ospedale degli Innocenti’. The frieze of loggia is decorated with multicoloured glazed band of terracotta and medallions. The author of the latter is Giovanni, the son of the famous Florentine master Andrea della Robbia.

Medical training was conducted nearby – in the Ceppo hospital. Lectures had been read from the beginning of the 16th century, and in 1666 the school of medicine of Pistoia was officially founded. The duration of the studies consisted of six years, there were departments of practical medicine, surgery, anatomy, practical cases, operations and gynaecology. There was also a so-called ‘anatomical theatre’ established, where the teachers gave lectures on anatomy, which had an amphitheatre style, with a room with benches rising gradually along the walls. In 1844 the school was closed due to the lack of students. At the moment you can see the expositions of surgical instruments and pharmaceutical laboratory displayed in Pistoia hospital. The laboratory stores the old equipment that was used to produce and to store medicines. 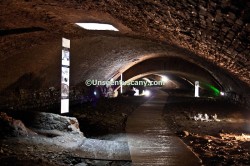 There is also a possibility to visit the old city tunnels, stretching under the hospital and the city streets.

The Cathedral of San Zeno – the most important Romanesque church in the city, which houses an extremely valuable silver altar and octagonal baptistery made of white and green marble.

The town hall building, the Bishops Palace, the Courthouse and the graceful tower Torre di Catilina are also worth attention. In the Middle Ages, pilgrims used to start their pilgrimage to Santiago de Compostella in Spain from the main city square, which is even now the place for the main Pistoian festivals and celebrations, and on Wednesday and Saturday mornings you will find here a huge market. The square Piazza della Sala is the old commercial heart of the city, in which the fruit and vegetable market is now located. The church of Spirito Santo stores the altar by Bernini.

The first of them is the festival of Giostra dell’Orso, which is held on 25 July in honour of St. Jacob, the patron saint of the city. Three days before, there is a celebration of St. Jacob’s dressing – a red mantle is placed on the statue and the statue itself is put on the façade of the cathedral and remains here during the holiday. Giostra dell’Orso – is an ancient horse-racing in the cathedral square covered in ground, which takes place between four districts of the city (rioni). The name of the event arose from the city’s coat of arms, featuring a bear, also known as ‘micco’. During the festival, the city dramatically changes – a huge procession of city dwellers adorned in ancient costumes stretches over the streets in the morning of July 25th, followed by the Mass, during which the relics of St. Jacob are exhibited in the cathedral, and finally horse race in the evening. 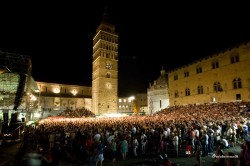 And those, who are really fond of music, should not miss another initiative, known as the Festival Sentieri Acustici, which provides an opportunity to listen to music for free in various towns and villages of Pistoia. Perhaps the most beautiful part of the festival is the final week, when the world music sounds in the mountains, surrounding Pistoia.