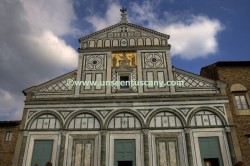 San Miniato al Monte is a basilica, located high above the city and is one of the finest examples of Romanesque architecture in Tuscany and of unseen Florence. San Miniato was the first martyr of the city, probably a Greek or Armenian merchant, who came to Florence in the 3rd century and was killed here. The legend says that the pilgrim was beheaded, but he picked up his head and went up the hill. Later a church was built in this place. The plan of the current church, constructed in the 13th century, is based on the principles of Roman architecture, and the inside is even odder – the part of the altar is raised above the usual and under the lift there is a dark crypt equipped, protecting the relics of San Miniato. 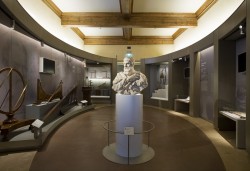 The Galileo Museum is one of the few non-art museums and it indeed deserves attention. One of the most unusual objects in the museum is the middle finger from Galileo’s right hand. Moreover, there is a number of research instruments, globes, stethoscope, navigation equipment, and telescopes of the 15th – 16th centuries exhibited, which perfectly reflect the activities of Galileo and scientific evolution.

Fontana del Porcellino – the Fountain of the Piglet 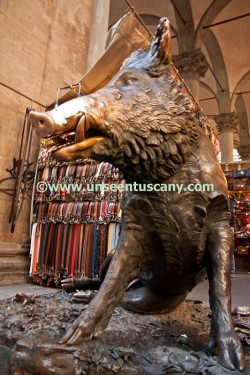 The Fountain of the Piglet is a popular attraction in Florence, situated near Loggia del Mercato Nuovo, walking towards the Old Bridge. It is interesting that the name is inaccurate because the sculpture depicts a wild boar. Cosimo I de Medici received the original as a gift from Pope Pius IV and today it is displayed in the Uffizi Gallery. A bronze copy was created in the beginning of the 17th century. It is said that you need to rub the boar’s snout, then put a coin in his jaws and see if it falls with running water through the bars at the bottom or hangs over them. If the coin falls through the bars – it foreshadows success.

Real pearl of unseen Florence is Palazzo Davanzati. It is a palace of the 14th century in the centre of Florence, which belonged to the Davizzi family. Its members were known as bankers and merchants, who built their house in a square, surrounded by houses-towers. Now it is a museum with impressive objects, history and testimonies of the life of wealthy citizens during The Middle Ages and The Early Renaissance. One of the most spectacular places is its inner courtyard and terracotta pipes, going down from the roof. This way family collected rain water, run it off into the tank under the palace and used it for household needs. It was an unprecedented comfort in The Middle Ages. On other floors of the palace living-rooms, work rooms, kitchen and kitchen appliances, toilets and tubs can be seen. 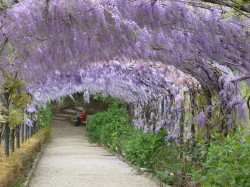 One of the most beautiful parks in Florence is Giardino Bardini in a style of Italian Renaissance. This recently opened green patch is yet little-known to tourists and one f the gighlights of unseen Florence; therefore it is a great place to run away from the city noise and plenty of people. The terraces of perfectly groomed park open a great view of Florence.

Chiesa Dante e Beatrice – the Church of Dante and Beatrice

In a narrow and dark alley there is a small hidden church of Santa Margherita dei Cerchi. It is small but very important – it is believed that it was a place where Dante and his muse Beatrice used to pray. According to legend, Dante and gorgeous Beatrice met only twice, but he swore to love her forever and dedicated his most famous works. There is Beatrice’s tomb in the church, where tourists leave their notes with prayers.

In one of the main streets of Florence there is a strange building – it has a square plan, it is high and is decorated with Gothic ornaments and the sculptures of saints. Orsanmichele literally means the ‘kitchen garden of St. Michael’ in Italian. The building was named this way not in vain – since the 8th century there was a small shrine and in 1337 the present building was constructed as a garden, grain store and market of St. Michael monastery. The first floor of the building was used for trade; the second floor was devoted to offices; while the third housed the grain storehouses, maintained to withstand difficult times. In the 15th century, the building went to powerful guilds and was converted into a chapel.

Cappella Brancacci – the Chapel of Brancacci 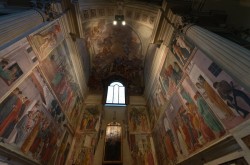 The Chapel of Brancacci is located in the church of Maria del Carmine, which is on the other side of the River Arno, the side of unseen Florence. Although not so often visited by tourists, it is very impressive – it contains frescoes by Masolino, Masaccio and Lippi. It is sometimes even called the early Sistine Chapel. And its not for nothing – the greatest masters of the Renaissance wall paintings created huge and original series of frescoes, depicting the biggest sins of the world, the episodes from the Bible and the Gospels. 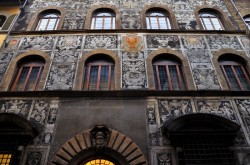 The Palace of Bianca Cappello, located on the other side of the Arno River, attracts the admirers of unfortunate and mysterious love stories. The beautiful Bianca Cappello was a daughter of a Venetian noble, a mistress of the Grand Duke of Tuscany Francesco I de’Medici and later became his wife. Bianca’s life was full of scandals and intrigues: when she met Francesco I, the Duke was already married, but this fact did not stop her from having an affair with him. Soon after the mysterious death of Francesco’s wife, Bianca rushed to marry her lover. After nine years both of them died in their country villa. It is believed that they were poisoned with arsenic.

Basilica della SS. Annunziata- the Basilica of the Most Holy Annunciation 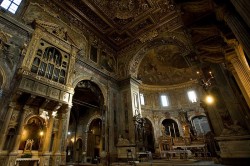 This modest-looking shrine, which does not remind a church from the outside, hides real treasures inside. The basilica was built in 1440. The inside astounds by its darkness and the abundance of decorations – there are works of Alberti and Giambologna, Andrea del Sarto and Pontormo in here. From the church you can access the courtyard of nearby cloister, called the Courtyard of the Dead. According to legend, Andrea del Sarti fell asleep while painting fresco and, on his waking, found out that the painting had been miraculously completed. 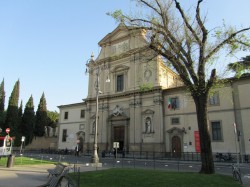 St. Mark’s Basilica was a part of the tremendous complex of Saint Mark’s monastery for ages. This monastery was a place of study and living for many famous monks, such as Beato Angelico, Fra Bartolomeo, Tommaso Caccini (who was known as the main instigator of the trial against Galileo Galilei due to his alleged heresies). However, perhaps the most famous of them was Girolamo Savonarola, who ruled the city of Florence for several years and initiated ‘the Bonfire of the Vanities’ that destroyed plenty of books, paintings and other luxury items. He was burned on fire. It is now possible to visit St. Mark’s monastery, to see the old monastic cells, even those where Savonarola lived.