From Brescia to Roma and back: 1000 miles on white roads 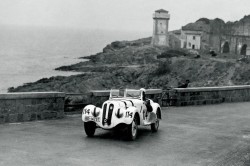 From Brescia to Roma and back: 1000 miles on white roads. This was Mille Miglia, the most famous historical Italian car race, that this year celebrates the eighty-sixth birthday. From 1927 to 1961 the race was more than a competition between cars, it was a challenge against the fate, for professional pilots and fearless gentlemen drivers. Just think about the time record: 1000 miles in few more than 10 hours, reaching speed over 250 km/h almost all on the gravel, and think that it was made in 1955, by Stirling Moss.

The race was so dangerous that, after a dreadful incident in 1957, local authorities decided to stop it. But the passion was too strong and Mille Miglia has risen from the ashes, like an historical competition, with the original route and cars. Infact, the car models that can enter for the Mille Miglia, are those of which at least one specimen took part in one of the speed editions (1927-1957). 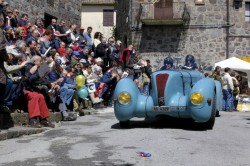 The Mille Miglia 2013 will be held from the 16-19 of May 2013, and it will pass through Florence on Saturday, 18 May. The combination between these beautiful cars and a city where time seems to be stopped, will give to everyone the opportunity to immerse themselves in the years of the roaring engines and to admire from very close these stunning old stylish cars. But if you prefer to watch these “noble ladies” in motion, you should go to “Passo della Futa”, a pass on Appennino mountains among Tuscany and Emilia Romagna. 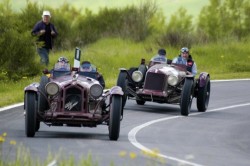 But Mille Miglia is not just cars, is also a part of the Italian culture, and glamour. For instance, in 1950 the young pilot Giannino Marzotto showed off his impeccable double-breasted suit and tie, starting out from where the sealing of the cars takes place in Piazza della Vittoria and then departing from Viale Venezia. He was behind the wheel of his Ferrari 195 S Berlinetta and had to endure the sarcasm of his fellow professional racecar drivers and established champions who were dressed in their ordinary race suits. On the eve of the race, after he won, those favored drivers mocked Marzotto a bit less. After many years the drivers pointed out that he participated in that first Mille Miglia race convinced to be pulled out for some difficulty with the car. Afraid of facing a long journey home, perhaps by train, he thought he should at least start out by being well dressed, in a formal suit and tie.

So if you are planning to come to Tuscany in May, don’t miss out this event, we will update you all about the program and the timeline of Mille Miglia in Florence. By the way, 17-18 of May in Florence will take a place the famous wine festival „Wine Town 2013“. Stay Tuned!