Due to Campo dei Miracoli and the leaning tower, Pisa is famous in the whole world. However, you should not forget attractions of unseen Pisa. Although not so famous, they are really interesting, so take this opportunity! 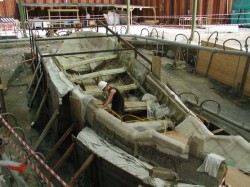 The Museum of the Ancient Ships of Pisa – is an archaeological museum that appeared quite accidentally – in 1998, during the construction of a railway line, the well preserved remains of an ancient seaport were discovered. The lack of oxygen and marshy ground helped to preserve the old Roman and Pisan ships and specific port devices till nowadays. The museum is located in Il Cantiere delle Navi Antiche di Pisa (English: Ancient Ships Working Site), which can be visited during the tour where you can get acquainted with archaeological findings and their restoration, as well as with the history of Pisa navigation. This is real unseen Pisa that you are looking for!

The National Museum of St. Matthew in Pisa is situated in the palace on the banks of the River Arno. The museum contains a number of works by the most eminent artists and sculptors in the area of Pisa (e.g. Andrea Pisano, Simone Martini, S. Paolo del Masaccio), as well as masterpieces by Donatello and Beato Angelico. 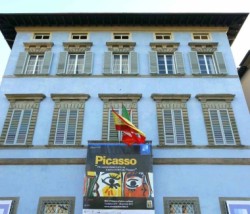 The Blue Palace is a so-called gallery, located in the blue painted building on the banks of the River Arno. The gallery is known for its excellent exhibitions: during the last four years there were the displays of Vassily Kandinsky (2012), Pablo Picasso (2011), Joan Mirò (2010) and Marc Chagall (2009). 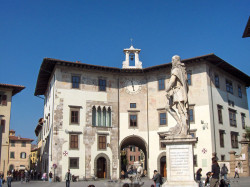 Piazza dei Cavalieri – the most famous square in Pisa, just a few minutes’ walk from the leaning Tower of Pisa. The square appeared by the courtesy of Cosimo I de Medici and his architect Giorgio Vasari. This square was designed in honour of Ordine dei Cavalieri di Santo Stefano (English: the Order of the Knights of St. Stephen); there is also Palazzo dei Cavalieri – The Knights’ Palace with its spectacular façade. And nearby Palazzo dell’Orologio (English: the Clock Palace) hides a terrible story. In the 13th century there was Torre della Famethe (English: the Tower of Hunger), where count Ugolino died in 1289. He was locked in the tower as a traitor together with his two sons and grandchildren and left to die of hunger. The story tells that the count ate his sons and grandsons because of hunger, but eventually he died as well. This story was described in Dante Alighieri’s “Divine Comedy.” 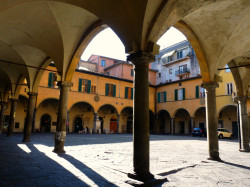 The Vettovalgie Square in the centre of the city is maybe the best part of unseen Pisa and it is worth attention. Every morning a fruit and vegetable market opens here and under the porticoes small butcher and baker’s shops, bars and restaurants are located. The colourful and noisy square smells of the Middle Ages and narrow, rarely visited streets, where it is a great fun to get lost, tempt tourists to the old town.

Borgo Stretto and the surrounding streets represent unseen Pisa and attract both local and city visitors. There are plenty of stores and during the Christmas period a huge market opens up in here. 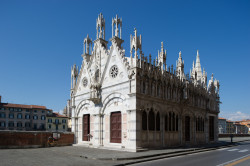 A fascinating tiny church, located on the banks of the Arno River, seems as if it does not belong to this place. Chiesa Santa Maria della Spina is one of the most remarkable examples of Gothic architecture in Europe, built in 1230. It is said that once this church stored an amazing relic – a thorn from Jesus’ crown (that is how the church got its name, ‘spina’ literally means ‘a thorn’ in Italian).

Basilica of San Piero a Grado

Romanesque Basilica of St. Peter a Grado stands in about 7 kilometres from Pisa, but it is definitely worth a visit. According to legend, in 44 AD the apostle Peter landed in the vicinity of the current cathedral.