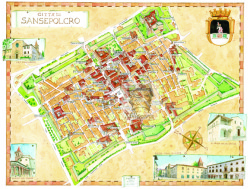 Sansepolcro is a small and cozy town located on the plains of the Upper Tiber Valley, in the southeast of Tuscany. It is interesting for its art works, architecture, and Palio della Balestra (crossbow tournament) held every year on the second Sunday of September. Here is our brief Sansepolcro guide.

According to tradition, the town was founded around 1000 AD by two pilgrims, Arcanus and Aegidius, who brought a stone from the Church of the Holy Sepulchre (thus, San Sepolcro) with them from the Holy Land. They founded an oratory dedicated to Saint Leonard, on the site of the current Cathedral.

Besides the town is the birthplace of the italian painters Piero della Francesca, a pupil of Raphael Raffaellino del Colle, Santi di Tito, and Angiolo Tricca. Italian mathematician Luca Pacioli was born there, and Matteo Cioni, who translated into Latin Piero della Francesca’s treatise about perspective in painting.

The Cathedral of Sansepolcro. The Duomo is dedicated to S. Giovanno Evangelista. The church, formerly an abbey church, occupies the site of the town’s first Benedictine monastery. It retains many beautiful works of art and its masterpiece is “Il Volto Santo”, an unusual carved wooden Crucifix of Carolingian origin made from a single walnut log between the VIII and IX centuries.

The Fortress (Fortezza Medicea) The Medici Fortress is a fine example of XVI century military architecture based on a design by Giuliano da Sangallo and completed by Alberto Alberti. In 1800 was transformed into a farm. It is private property now.

Aboca Museum (Museo delle Erbe). The only Herb Museum, has rediscovered the history of the millenary relationship between Man and Herbs and is passing it down to future generations. Aboca Museum, thanks to the Herbs and Health Over the Centuries museum path at the prestigious Renaissance residence of Sansepolcro, communicates the ancient tradition of Medicinal Herbs through historic sources.

Merletto Museum (Spazio del Merletto). The museum contains works of bobbin-made lace, one of the crafts which has been typical of the Valtiberina since the XIX century.

The Bishop’s Palace (Palazzo Vescovile) erected on the site of an pre-existing Abbey, first Benedictine then Camaldolese. Annexed to the church the Bishop’s Palace was once a part of the original abbey. Its cloister has 16th-century frescoes depicting the Life of St. Benedict, as well as the tomb of artist Piero della Francesca.

The Alberti Palace (Palazzo Alberti), constructed in the XVII century, has a bust of Cosimo II Medici on the facade.

The Church of S. Agostino, initially the parish church of Santa Maria, it was rebuilt in 1771 in Baroque style. The bell tower is adapted from an antique mediaeval tower.

Crossbow Tournament (Palio della Balestra) is held every year on the second Sunday of September. During the feast many citizens wear medieval and renaissance costumes inspired by the paintings of Piero della Francesca, and Piazza Torre di Berta becomes the site of the historical competition called “Palio of the Ballestra”. During this tournament the crossbow-men of Sansepolcro challenge those from Gubbio town in neighbouring Umbria region. The challenge between Gubbio and Sansepolcro is dated back to the XVII century.

Lace-Makers Fair. Every two years (in September-October) Sansepolcro becomes the Town of Lace-Makers, where exhibitors come from throughout Italy and also from abroad.

Anghiari is a stunning medieval town between the Sovara and the valley of the Tiber. Its name is connected with a famous battle of Anghiari fought in 1440 in the plain of Anghiari and painted by Leonardo da Vinci in Palazzo Vecchio in Florence.

Badia Tedalda village lies on the border between Tuscany and the Marche, along the pilgrim road which monks, pilgrims and abbots took for centuries.

Caprese Michelangelo. The name of this old village honours the artist Michelangelo Buonarroti, its greatest citizen.

Monterchi. The Medieval village rises up on site which was sacred for the ancient Romans dedicated to the cult of Hercules. Today the village is a must on the Art Route of Piero della Francesca because of its birth house.

Montecasale. The Hermitage of Montecasale and the church stand on a hill which dominates the Valtiberina. San Francesco on his return from La Verna used to stop to pray here.

The Natural Reserve Alpe della Luna, which lies on the sides of Monte dei Frati and Monte Maggiore, north-east of Sansepolcro, extends for about 1503 hectares. It is made up of woods of beech tree, turkey oak, hop-hornbeam.

The Nature Reserve Sasso di Simone covers an area of about 1,575 hectares on the boundary between The Marche and Tuscany. The Sasso Simone is a huge block of limestone.