Things to see in Arezzo 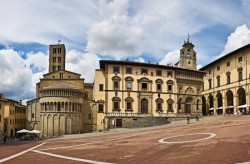 Arezzo is set on a steep hill rising from the floodplain of the River Arno. In the upper part of the town are the cathedral, the town hall and the Medici Fortress (Fortezza Medicea), from which the main streets branch off towards the lower part as far as the gates. There are many things to see in Arezzo, so we did the list of the main attractions of the city.

Piazza Grande. Lets start our list of things to see in Arezzo from Piazza Grande. It is the most noteworthy medieval square in the city, opening behind the 13th century Romanesque apse of Santa Maria della Pieve. Once the main marketplace of the city, it is currently the site of the Giostra del Saracino (“Joust of the Saracen”).

Casa di Vasari. Vasari’s House is the artist’s home in Arezzo. Vasari himself was responsible for the layout and furnishings (around 1540).

Fortezza Medicea. Medici‘s fortress designed by Antonio da Sangallo the Younger and completed in 1538–1560. It was partly dismantled by the French in the early 19th century.

Museo Nazionale d’Arte Medievale e Moderna. The State Museum of Medieval and Modern Art is housed in the Bruni-Ciocchi del Monte Palace, which Donato, son of humanist Leonardo Bruni, had built during the middle of the 15th century. The collections there offer a good panorama of art in the Arezzo territory during medieval and modern times.

Casa del Petrarca. The current construction of Petrarca’s House (in Via dell’Orto, just beyond the Pozzo di Tofano (Tofano well), was built in the 16th century on the remains of a medieval building traditionally held to be Francesco Petrarca’s birthplace (1304).

Amfiteatro Romano di Arezzo. The Roman Amphitheatre in Arezzo was built between the end of the 1st century and the beginning of the 2nd century A.D. with blocks of sandstone, bricks and marble; it is elliptic in shape and has two sets of stairs. Its longest axis measures 121 m and probably it could contain eight thousand people.

Santa Maria della Pieve. The most striking feature of this Romanesque church is the massive, square-planned bell tower with double orders of mullioned windows. The church was built in the 12th century over a pre-existing Palaeo-Christian edifice.

Cathedral of San Donato. The façade of this Gothic style church remained unfinished, and was added in the 20th century. The interior has a nave and aisles divided by massive pilasters. The left aisle has a fresco by Piero della Francesca portraying the Madeleine. Noteworthy are also the medieval stained glass, the Tarlati Chapel (1334) and the Gothic tomb of Pope Gregory X.

Basilica of San Francesco. This basilica was built in Tuscan-Gothic style in 13th-14th centuries. The interior has a single nave: the main attraction is the History of the True Cross fresco (1453–1464) cycle by Piero della Francesca in the Bacci Chapel. Under the church is another Basilica with a nave and two aisles (Basilica inferiore), today used for art exhibitions.

Basilica of San Domenico was founded in 1275 and completed in the early 14th century. The interior has a single nave with a Crucifix by Cimabue, a masterwork of 13th-century Italian art.

Palazzo dei Priori, erected in 1333, has been the seat of the city’s magistratures until today. The edifice was numerous times restored and renovated; the interior has a court from the 16th century, a stone statue portraying a Madonna with Child (1339), frescoes, busts of illustrious Aretines, two paintings by Giorgio Vasari. The square tower is from 1337.