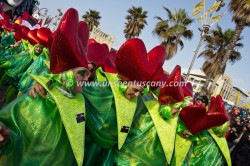 The Viareggio Carnival 2014 (it. Carnevale di Viareggio) is a event held in the Tuscan city of Viareggio, in Italy. It is considered amongst the most renowned carnival celebrations in both Italy and Europe. Its main characteristic is given by the parade of floats and masks, usually made of paper-pulp, depicting caricatures of popular people, such as politicians, showmen and sportsmen; the parade is held on the Viareggio avenue located alongside the local beach.

Check out photos from this year performance!