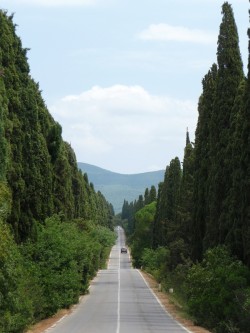 Bolgheri is a village frozen in time and space; its ancient spirit, savouring of tranquillity and traditions, is easy to sense strolling quietly around its streets. Bolgheri wine is one of the most famous and the best wines in the world. Thus if you find yourself in the Mediterranean coast, go to the south of Livorno – Rosignano, Cecina, Vada, La California – until you finally reach the land of Maremma, Bolgheri and its fortress. A long and straight like an arrow cypress highway – Via dei Cipressi – leads to Bolgheri. Two thousand centuries old cypresses divide the land of Maremma into two parts, leaving olive fields on one side and vineyards – on another.

Since the 8th century, the village has been known as a property of the ancestry of count Gherardesca. Sometime later the counts of Longobard origin became an influential family in the Republic of Pisa, reaching the peak of their power between the 11th and 13th centuries. Later Bolgheri suffered from battles between Pisa and Florence, therefore today’s village is the result of the 18th century reconstructions, very much reminding of grandmother’s tales. Small houses of stone, cuddled together along only three paved village streets, cosy nooks, a terrace with the view of surrounding hills, small inns, restaurants and shops, 30 residents and 8 cantinas-pubs-restaurants. 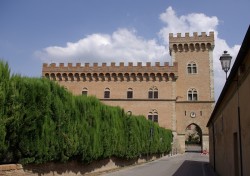 The winemakers of Bolgheri specialise in red wines, created by making blends of different grape varieties. The wine of this area is extremely intense, has a dark red ruby or garnet colour and is full of bewitching flavours and scents – the aromas of wild berries, cherries and oak slowly slips down your mouth presenting a few moments of perfect, fresh and long lasting taste. During harvest season, the bunches of grapes are only hand harvested and packed into boxes; later the grapes are slightly mashed and stored for 3-4 days at a temperature of 7-8°C for pre-fermentation. After that, grapes are kept for about two weeks in rising temperature and eventually the liquid is poured into barrels, where it is stored for about two years, thus the barrels require focal attention – each of them is made of French oak and is kept in external conditions for at least three years. The wine aged in barrels is finally poured into bottles, where it is stored for another 24 months till you can see a shining, ruby colour of Bolgheri gold in a high wineglass.