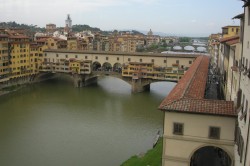 The Vasari Corridor (Italian: Corridoio Vasariano) is an elevated enclosed passageway in Florence, central Italy, which connects the Palazzo Vecchio with the Palazzo Pitti. Beginning on the south side of the Palazzo Vecchio, it then joins the Uffizi Gallery and leaves on its south side, crossing the Lungarno dei Archibusieri and then following the north bank of the River Arno until it crosses the Ponte Vecchio. At the time of construction the Torre dei Mannelli had to be built around using brackets because the owners of the tower refused to alter it. The corridor covers up part of the façade of the chiesa di Santa Felicità. The corridor then snakes its way over rows of houses in the Oltrarno district, becoming narrower, to finally join the Palazzo Pitti. Most of it is closed to visitors.
The Vasari Corridor was built in 5 months by order of Grand Duke Cosimo I de’ Medici in 1564, to the design of Giorgio Vasari. It was commissioned in connection with the marriage of Cosimo’s son, Francesco, with Johanna of Austria. The idea of an enclosed passageway was motivated by the Grand Duke’s desire to move freely between his residence and the government palace, when, like most monarchs of the period, he felt insecure in public, in his case especially because he had replaced the Republic of Florence. The meat market of Ponte Vecchio was moved to avoid its smell reaching into the passage, its place being taken by the goldsmith shops that still occupy the bridge. At the latter extremity, the corridor was forced to pass around the Mannelli’s Tower, after the staunch opposition of that family to its destruction. 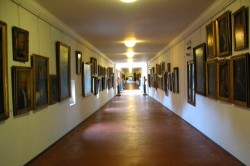 In the middle of Ponte Vecchio the corridor is characterized by a series of panoramic windows facing the Arno, in the direction of the Ponte Santa Trinita. These replaced the smaller windows of the original construction in 1939, by order of Benito Mussolini. The larger windows were installed for an official visit to Florence by Adolf Hitler to give him a panoramic view of the river.

After the Ponte Vecchio the Corridor passes over the loggiato of the church of Santa Felicita; at that point it had a balcony, protected by a thick railing, looking into the interior of the church, in order to allow the Grand Duke’s family to follow services without mixing with the populace.

In its Uffizi section the Vasari Corridor is used to exhibit the museum’s famous collection of self-portraits.

The area closest to the Uffizi entrance was heavily damaged by a terrorist attack commissioned by the Italian mafia in 1993. During the night of May 26, 1993 a car full of explosive was set off next to the Torre dei Pulci, located between via Lambertesca and via de’ Georgofili, and 5 people died. Many others were injured and several houses were heavily damaged, including this section of the Uffizi Gallery and the Vasari Corridor. In the Corridor, several artworks were destroyed by the explosion. These paintings, some hopelessly damaged, have been pieced back together and placed back on their original spot to serve as a reminder of the horrible attack.