UnseenTuscany.com presents a rubric ‘The Place of the Week’ – every Monday you will find a new article on our website, in which we will present some place or object of interest in Tuscany. Our goal is to introduce to you exciting, mysterious places of attraction that are little known to tourist. So today, the attention goes to – Corchia and the treasures of its underground world.

Antro del Corchia (English: The Corchia Cave) is hiding in the territory of Parco delle Alpi Apuane (English: The Apuan Alps Park), near the Levigliani di Stazzema village. It is an unusual place, sometimes called ‘the Empty Mountain’, where you can have a close view to the secrets of 5 million years of geological history. The cave consists of intricate corridors, wells and grottoes; it has a total length of about 70 km and 1200 m difference in height. Antro del Corchia is considered to be one of the longest and most impressive complexes of the underground world in Italy.

Since 2001 it was fitted with the route of 2 km, designed for tourists, which allows not only geologists, but also you to explore the remarkable Corchia caves. The entrance to the cave is situated at an altitude of 860 m, in an old marble quarry. Underground lakes with icy crystal clear water, the ‘Petrified Forest’ and the ‘Gallery of Stalactites’, the colourful rocks of grottoes – from creamy to red – leave indelible impressions.

The entrance to the cave costs €12; tourists are accompanied by a guide (Italian, English, German, French and Spanish languages). The tour takes approximately two hours. It is necessary to dress warmly – the temperature in the cave is constant at around +8°C. It is possible to book in advance a three-hour excursion with speleologists, who will show the routes not intended for tourists (attendant speleologists will provide you with part of the software). 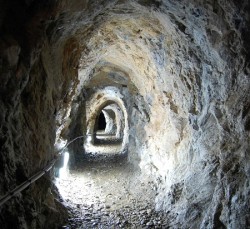 While visiting the Corchia Caves it is necessary to seize the opportunity to drop into the ‘Miniere dell’Argento Vivo’ (English: The Mines of Quicksilver). It is the oldest Tuscan mine of quicksilver, mentioned already in 1153; it was also one of the most famous quicksilver mining sites in the world. During the tour around the quarry, you will get acquainted with the old mining techniques, which are magnificently restored in tunnel installations.

The price of entrance and guided tour is €6,50. The duration of the excursion is approximately 1 hour. It is necessary to wear a sweater – the temperature in the mines is around +14°C.