Things to do in Florence: museums 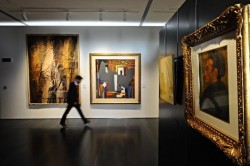 Uffizi Gallery. Among the museums of Florence the Uffizi Gallery one the oldest and most famous art museums of Europe, and when you make your list of things to do in Florence, it is the MUST. Today, the Uffizi is one of the most popular tourist attractions of Florence. In high season (particularly in July), waiting times can be up to three hours. The collection contains: Cimabue, Giotto, Uccello, Lippi, Verrocchio, Botticelli, Da Vinci, Michelangelo, Duerer and many more.

Accademia Gallery. The Galleria dell’Accademia di Firenze, or “Gallery of the Academy of Florence”, is the home of Michelangelo’s sculpture David. It also has other sculptures by Michelangelo and a collection of Renaissance paintings.

Bargello Palace. Bargello Palace is a former barracks and prison, now an art museum. It should certainly appear in your list of things to do in Florence! The museum displays the largest Italian collection of gothic and Renaissance sculptures (14–17th century).The museum houses masterpieces by Michelangelo, Donatello, Sansovino, Giambologna, Benvenuto Cellini, Gianlorenzo Bernini and many works from the Della Robbia family. The museum also has a fine collection of ceramics (maiolica), textile, tapestries, ivory, silver, armours and old coins.

Davanzati Palace. Davanzati Palace houses the Museum of the Old Florentine House. By 2012 all the floors were open to visitors, so you can discover how rich Florentines lived. If you are interested in less-known spots of the city, it should certainly appear in your list of things to do in Florence.

Bardini Museum. The museum houses an eclectic collection of more than 3,600 works, including paintings, sculptures, armor, musical instruments, pottery, coins, medals and antiques. Two rooms on the ground floor are devoted to Florence and its history.

Stibbert Museum. The museum contains over 36,000 artifacts, including a vast collection of armour from Eastern and Western civilizations. The villa, which was once Stibbert’s home, has 57 rooms that exhibit all of his collections from around the world. Most of the walls are covered in leather and tapestries and the rooms are crowded with artifacts.

Galileo Museum. Galileo Museum, the former Istituto e Museo di Storia della Scienza, owns one of the world’s major collection of scientific instruments. If you are curious or have kids, it should certainly appear in your list of things to do in Florence.

Strozzi Palace. The palace is used for international expositions, check the website before.

National Museum Alinari of Photography. It hosts special exhibitions on a regular basis and possesses 350.000 vintage prints from the 19th and 20th centuries. The museum exhibits also thousands of photo albums, cameras, objectives and other objects connected with the history of photography.

Museo del Novecento. Dedicated to the Italian art of the 20th century, the Novecento Museum offers a selection of around 300 works located in 15 exhibition areas, in addition to a study room, a cabinet for drawings and prints and a room for conferences and projections.

Museum of Casa Martelli. The museum is an interesting example of an 18th-century nobleman’s home and of the family’s tastes in collecting. This spot is certainly out of almost all tourists routs, but undeservedly forgotten, so just put it in your list of things to do in Florence and you will not regret.

Information and photos: www.polomuseale.firenze.it and www.wikipedia.org