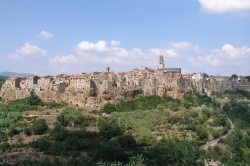 The Tuff Area in Maremma is named after tufo, a volcanic, porous rock commonly used as a building material. The tuff has been carved over the centuries to build houses, cellars, tombs or used to make “tufi”, big square bricks which are typical of the villages and towns of this area of the hills of the Maremma.

The major centres of tuff area in Maremma, which has still not experienced mass tourism, are Pitigliano, Sorano and Manciano. The perfectly preserved necropolises in Sovana and Poggio al Buco, the vie cave (amazing roads carved in tuff that pass through the woods), and medieval villages like Magliano in Toscana contribute to make this area one of the most beautiful in Tuscany.

The best plays to stay in Maremma is Pitigliano, a town in the province of Grosseto, located about 80 kilometres south-east of the city of Grosseto. Pitigliano and its area were inhabited in Etruscan times, but the first extant written mention of Pitigliano dates only to 1061. The old town is known as the little Jerusalem, for the historical presence of a Jewish community has always been well integrated into the social context that here had their own synagogue.

One of the most interesting sightseeings of Pitigliano is Palazzo Orsini, seat of the county, which was built on an old Franciscan monastery and is presented in the 16th century forms of intervention Antonio da Sangallo occurred during the Renaissance. The complex, elegant lines, houses the Diocesan Museum, which houses various works of art ranging from the late Middle Ages, baroque era, in another wing you can find the Archeological Museum of the Etruscan civilization.

The oldest church of Pitigliano (mentioned in 1274) is San Rocco, almost at the end of the old part of town. It has an unusual trapezoidal layout and elegant, slim travertine columns. The 15th century Santi Pietro e Paolo cathedral of Pitigliano is based on Piazza San Gregorio, inside you can find historic paintings by Pietro Aldo.

The Tempietto (“Small temple”) is a small cave, probably of natural origin but considerably reworked by human hands, lying a few hundred meters outside the central district, yet far above the Lente valley. Its purpose and builders remain unknown. Locally it is referred to as a “paleochristian tempietto”, but this has never been confirmed; it must date to Late Antiquity or the early Middle Ages, although it may replace an Etruscan or Roman arcosolium.

Pitigliano is home to a series of artificial cuts into the tuff rock to varying depths ranging from less than 1 metre to over 10 metres. At the bottom of these cuts are carved channels, apparently for water, although some take the form of steps. The purpose of the cuts is not known: the three main theories are that they were roads, quarries, or water conveyance schemes; they radiate outward from the base of the butte of Pitigliano, down to the rivers then back to the top of the plateau that surrounds the town. A few very brief Etruscan inscriptions are said to have been found on the walls of the cuts, but are ill documented.

In the entire area of Pitigliano are numerous paths with walls more than 10 metres high, dug into the rock by the Etruscans. They wind down from the plateau’s to the river valleys below. Some are just outside of town: Leave town through the Porta di Sovana and descend down an Etruscan path to the left, till you reach the road to Sovana. Cross the road and continue down to the bridge across the Meleta River. From there follow the Etruscan path up to the church Madonna delle Grazie.

When you stay in Maremma for your holydays, try Bianco di Pitigliano, a white-wine DOC of the Tuff area. The mild climate and bright, reliable sunshine which characterize the Pitgliano terroir are key reasons why this is one of Tuscany’s longest-established white wines. Its long history was honored when in March 1966, it was one of the very first Italian DOCs to be created, on the same day as one of Italy’s most famous wines, Brunello di Montalcino, and a month before such greats as Barbaresco and Barolo. Bianco di Pitigliano wines are made from a base of Trebbiano Toscano, Tuscany’s white grape of choice, which must account for between 50% and 80% of the final blend. The remaining component can be made up of Greco Bianco, Malvasia Bianca and a local variety named Verdello (quite distinct from Portugual’s Verdelho).

Follow us to discover best resorts to stay in Maremma and tuff area!