Via Ferrata: climbing in Tuscany 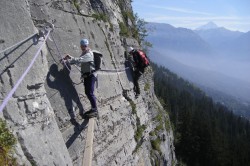 The Apuane Alps extend over a distance of 40km, paralleling the coast between La Spezia and Lucca. They form a spectacular backdrop to the many beaches along this stretch of coastline. This mountain range offers enormous diversity for the walker/climber. It rises to a maximum altitude of 1947m in the form of the very steep, but largely grassy sided, Monte Pisanino. On the other hand, Monte Sumbra (1764m) has rounded rocky shoulders, whereas Monte Cavallo (1888m) has limestone columns jutting into the sky, more reminiscent of the mighty Dolomites. On its northern side Pizzo d’Uccello (1781m) has an impressive 700m high, rock face. The mountain range is comprehensively served by refuges, footpaths, tracks and climbs which are well maintained by the Italian Alpine Club (CAI). 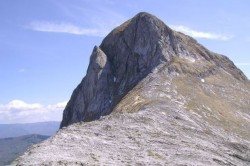 It is perhaps the most simple via ferrata of the Apuan Alps and the classic route for anyone who enters for the first time in the wonderful world of climbing and via ferrata. The section only takes a 20-minute walk and the exposure is limited, however the route is in any case very worthwhile as it allows the capture of a beautiful top remained miraculously untouched in an area literally devastated by the marble quarries. The route is not recommended during the summer due to excessive temperatures. It is not recommended to pass it before April 1. The best time for Via Ferrata Monte Sumbra are midseasons (late spring and autumn). 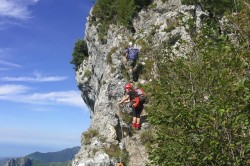 The Forato mount is very characteristic for its majestic natural arch of stone that connects the southern slopes of the peak (1223 m) with the north peak (1209 m), and creats a spectacular hole of 32 m wide and 26 m high through which you can admire the rays of the sun at sunrise and sunset. The route runs through the equipped southeast ridge, which connects the Foce di Petrosciana to the southern tip. The way is easy, presents some technical passage just at the beginning. In some parts, you should be careful because of the ridge is very thin and with vertical walls on both sides. With appropriate weather conditions the route lends itself well to be covered in the winter months as well. 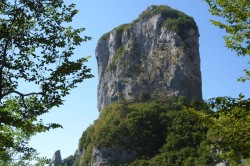 The Procinto mount (1177 m) is certainly the most characteristic rock structure of all the Apuan Alps: a square tower about 150 feet high, overhanging on all sides and resting on a bedrock little wider, which gives rise to a singular wooded ledge that runs all around the tower. On the top there is a a small grove. The route is easy and presents no particular technical steps of commitment, however, some areas are particularly exposed. The rock is very solid in the lower part, while the upper part is more broken and you must be very careful not to discharge stones. With appropriate weather conditions the route lends itself well to be covered in the winter months as well. 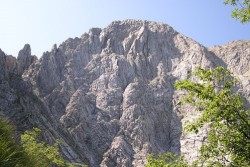 The route is a little bit difficult, without some special technical sections but still requires a certain commitment. The rock is generally good and only in the upper part presents a little ‘crumbly stretch. At several points the progression is facilitated by a few notches artificially excavated in the rock. The route is equipped continuously. The cable is generally well tended. Despite being a low-altitude route, after a particularly snowy winters may be feasible only in the season . 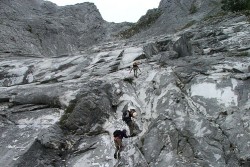 The route of Monte Contrario is the longest, especially physically demanding and technically difficult ferrata of the Apuan Alps. It was completed in 2002 and it is characterized by new material excellently fixed to the rock that follows all the way to the end (1645 m). The metal cable is in excellent. The route is considered technically difficult, while the entire excursion, from the physical point of view. It can also be divided in two days, so the night you can spend at the rifuge camp, so bring a good supply of water and food. Note that during storms, the hike becomes very dangerous. 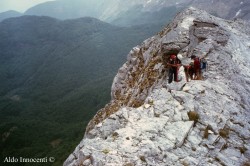 Actually not available. The itinerary is highly recommended only to the expert hikers and to deal with the route is necessary to have special equipment: harness, lanyard, heat sink, carabiners and helmet. The Sella mountain (1739 m) and the High Sella (1726 m) form a bastion of about 1700 meters above sea level. Once on the summit of the Sella you need to cross a narrow ledge (trail exposed and very dangerous) to get to the start of the via ferrata that runs throughout (1500 m of cable) in the slope garfagnino Arnetola.