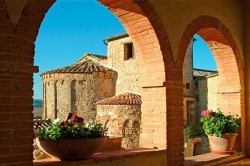 The Via Francigena is the common name of an ancient road and pilgrim route running from France to Rome, though it is usually considered to have its starting point much further away, in the English cathedral city of Canterbury. As such, the route passes through England, France, Switzerland and Italy. The route was known in Italy as the “Via Francigena” (“the road that comes from France”) or the “Via Romea Francigena” (“the road to Rome that comes from France”). In mediaeval times it was an important road and pilgrimage route for those wishing to visit the Holy See and the tombs of the apostles Peter and Paul.

In the Middle Ages, Via Francigena was the major pilgrimage route to Rome from the north. The Via Francigena was not a single road, like a Roman road, paved with stone blocks and provided at intervals with a change of horses for official travellers. Depending on the time of year, the political situation, and the relative popularity of the shrines of the saints situated along the route, travellers may have used any of three or four crossings of the Alps and the Apennines. An important point is that unlike Roman roads, the Via Francigena did not connect cities, but relied more on abbeys.

Most modern-day pilgrims would wish to follow route from Canterbury to Rome, and so would journey from Canterbury to the English coast before crossing the Channel to Sumeran (now called Sombres) landing at the point where the seaside village of Wissant now lies. Then to Reims, Châlons-sur-Marne, Bar-sur-Aube, Langres, Besançon, Pontarlier, Lausanne and Saint-Maurice. From Saint-Maurice they must traverse the Great St. Bernard Pass to Aosta and from Aosta they must pass through Ivrea, Vercelli, Pavia, Fidenza, Aulla, Luni, Lucca, San Gimignano, Poggibonsi, Siena, San Quirico d’Orcia, Bolsena, Viterbo and Sutri before finally reaching the city of Rome. 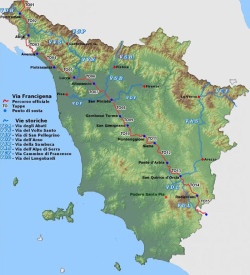 The Via Francigena in Tuscany has a length of 394 km, starting from Passo della Cisa and joins Lazio near Ponte a Rigo. The pilgrims route runs in Tuscany through towns, cities, monasteries, centres of trade and religious colonies, some of which were born and developed due to the presence of Via Francigena.

The Via Francigena in Tuscany, begins by crossing the Bardone Mountain. Passes through Lunigiana, arriving at Aulla, where you have the abbey of St. Caprasio, from there continues to Luni, where the famous remains of the ancient Roman city and the beautiful churches of the Via Francigena are located.

In Tuscany, past Lunigiana’s territories, the route runs along the coast of Versilia. You then arrive at Pietrasanta, where you can visit the beautiful churches of St. Giovanni and St. Felicita. Continuing we arrive to Lucca, where it is recommended to visit the Church of St. Paulinus, which contains the 15th century painting “The Coronation of Mary” which features an image of the ancient city walls. 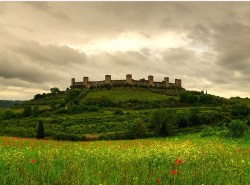 From Lucca, the pilgrim arrives at Altopascio and from there goes on to San Miniato, a small village that overlooks the plains of Tuscany. Continuing, Via Francigena reaches San Gimignano, the village of towers, where you can visit the Palazzo del Podestà, the Collegiate and the Fortress of Montestaffoli, where you can appreciate an overview of the city, of the route through Tuscany and of its hills.

The Via Francigena in Tuscany, passes through incredible and fascinating towns which still seem to lies in Dante’s time. A good example is Monteriggioni. Created as a fortress, hosting a garrisonn, it controlled the Via Francigena and the Elsa and Staggia Valleys. Continuing onward through Tuscany you reach Siena, where you cannot miss the opportunity to pay a visit to the “Complesso di Santa Maria della Scala” and the adjacent church of St. Giacono, where are the frescoes of the “Miracolo dell’Impiccagione dei Pellegrini”.

The last part of Via Francigena in Tuscany passes towns such as Buonconvento, San Quirico d’Orcia and Radicofani.