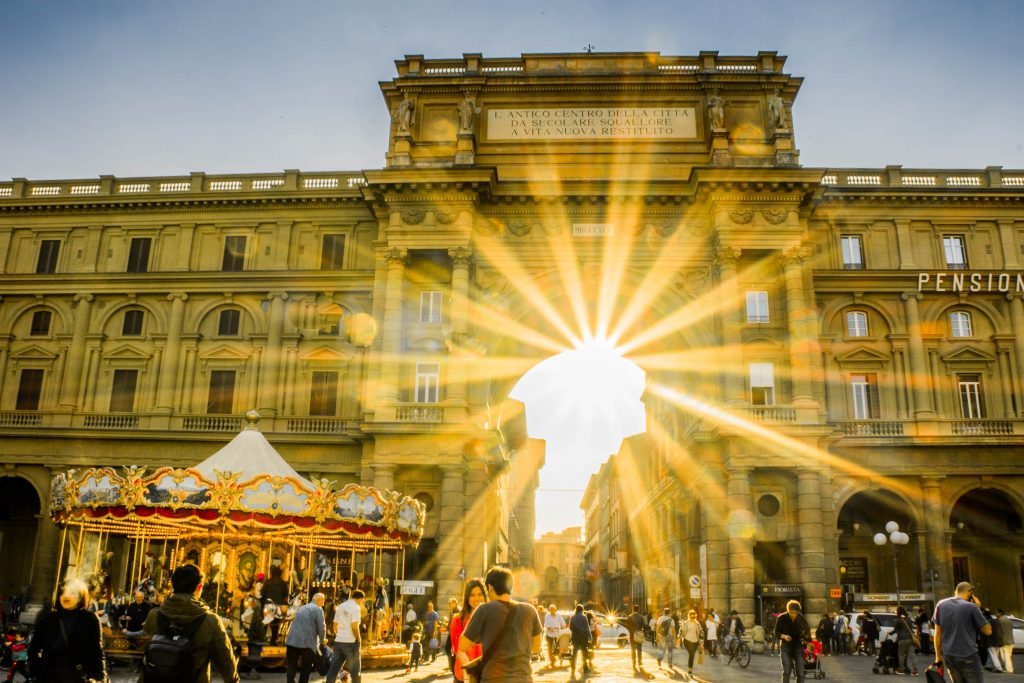 Cathedral of Santa Maria del Fiore. It was begun in 1296 in the Gothic style to a design of Arnolfo di Cambio and was completed by 1436, with the dome designed by Filippo Brunelleschi. The cathedral complex, in Piazza del Duomo, includes the Baptistery and Giotto’s Campanile. These three buildings are part of the UNESCO World Heritage Site covering the historic centre of Florence and are a major tourist attraction of Tuscany. Entrance into Santa Maria del Fiore cathedral is free. For this reason you’ll find a long line to get in, but it moves pretty quickly.

One of the most important squares in the city offers lots to see: the statues in the Loggia dei Lanzi, along the front of Palazzo Vecchio and in Piazza della Signoria turn the square into an open-air museum that is completely free. Feel free to admire artworks by such great artists like Michelangelo, Giambologna, Cellini, Bandinelli, Ammannati and other.

Basilica of San Miniato al Monte stands atop one of the highest points in the city of Florence. It has been described as one of the finest Romanesque structures in Tuscany and one of the most scenic churches in Italy. There is an adjoining Olivetan monastery, seen to the right of the basilica when ascending the stairs. The monumental cemetery in front and back of the church contains the tombs of illustrious men, such as Carlo Lorenzini (Collodi), author of Pinocchio. Entrance is free.

Located on the Via Calzaiuoli in Florence, the church was originally built as a grain market. Between 1380 and 1404, it was converted into a church used as the chapel of Florence’s powerful craft and trade guilds. On the ground floor of the square building are the 13th-century arches that originally formed the loggia of the grain market. Entrance to the church on the groundfloor is free.

Today Officina Profumo-Farmaceutica di Santa Maria Novella is considered the oldest historical pharmacy in all of Europe, active without interruption for almost 4 centuries, as well as one of the oldest commercial establishments ever. The ancient “spezieria” today is no longer pharmacy, but perfumery located in a real monumental environment, with decorations and antique furnishings. It also preserves a valuable collection of scientific material, such as thermometers, mortars, scales, measuring cups, etc.. You don’t need to buy something to visit this ancient pharmacy near the church of Santa Maria Novella.

First Sundays of the Month

If you’re in town on the first Sunday of the month, you can visit top museums of Florence for FREE!