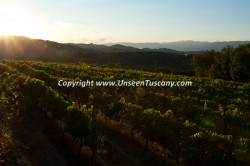 If you are looking for unique spot for romantic dinner, you can try dinner at Villa Bellosguardo Caruso. The sixteenth century Villa di Bellosguardo, located on the hills of Lastra a Signa, takes its name from its extraordinary position. The Villa originally presented two buildings, the master‘s one and the farm‘s one. The two were connected by a long wall with a central portal. The remaining pieces of this original framework are the beautiful double staircase and the sandstone‘s windows.

Today the late Renaissance style of the Villa only survives in the garden with its animal sculptures realized by Romolo Del Tadda, involved in those years in the project of the Boboli Garden. In the late years of the nineteenth century, the family Campi bought the estate and on 1906 it became property of the famous tenor Enrico Caruso. He restored and enlarged the mansion and transformed it in a typical tuscan villa.

On 1990 the Villa was sold to the family Gucci and on 1995 was finally bought by the town council of Lastra a Signa.

Some our photos of the dinner in villa Bellosguardo.