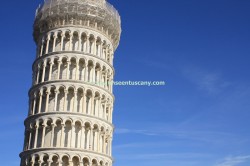 The leaning Tower of Pisa is one of the most famous buildings in the world. The tower, along with Pisa’s cathedral, baptistery and cemetery, constitutes the complex of Campo dei Miracoli. In 1773 Bonanno Pisano began the construction of the tower which lasted until the 14th century. After 5 years, yet in the first phase of construction, the Tower of Pisa started to lean, because the soil appeared to be unsteady (first 3 floors leaned to the north at an angle of 0,5 degrees). A century later, works were undertaken by Giovanni di Simone and Giovanni Pisano, who built three more floors and the tower tilted toward the south at an angle of 0,5 degrees instead. The tower was finished between 1360 and 1370. The current height of cylinder shaped tower is 54,5 m, its weight is estimated at 14 tons, 6 floors are surrounded by colonnades and 296 steps lead to the bell tower. Everyone can climb the leaning tower, but in summer there are long queues of visitors. By the way, when choosing wonders of the modern world, the Tower of Pisa was also nominated. 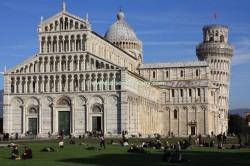 The Cathedral of Pisa is one of the most important examples of Romanesque art in Tuscan region and the symbol of the former republic of Pisa’s maritime might. Its construction began in 1063s (according to Pisa’s calendar, it was 1064s) under the guidance of architect Buscheto, who managed to blend the Romanesque architectural elements with Norman, Byzantine, early Christian and Arab building traditions, thus creating an original style. Actually, reconstruction works of the cathedral in Venice were initiated at the same time, so 2 maritime towns competed in creating a more beautiful religious building. What tourists are seeing now is the result of Buscheto’s and many subsequent amendments, overwhelming and staggering not only with its outside but also with interior. 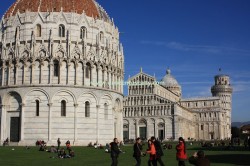 Another building of Campo dei Miracoli is the baptistery, whose construction started in 1153, according to the project by architect Diotisalvi. It is the largest baptistery in Italy. Most of the sculptures, decorating the facade, were created by famous Nicola Pisano and his son Giovanni. The cone-shaped dome of the baptistery distinguishes for its originality (though it is often said that such solution was chosen due to lack of funds).

The cemetery of Pisa, according to legends, is a holy place, because its soil was brought by crusaders from Golgotha hill near Jerusalem. The signs of the Etruscans and the Romans were found in the territory, later it became a burial place for the most famous and the most prominent Pisan dwellers. The most venerable received places in the central part, in Roman sarcophagi. Those who were less worth were laid to rest in the arches set up in side walls. 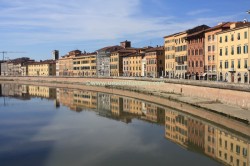 The banks of the Arno River in Pisa are really spectacular and tempting to take a romantic evening stroll. There are many eye-catching, flamboyant old buildings, bridges, churches and squares. And every June the banks of the Arno River invite everyone to an extraordinary celebration – Luminara di San Ranieri. It is a festival dedicated to San Ranieri, the patron saint of Pisa, during which the buildings, situated on both banks of the river, are decorated with thousands of lights, the city organises regatta and historical ‘Giorco del Ponte’ takes place on the bridges (English: The Game of the Bridge) in which two opposing teams struggle in pulling a carriage.