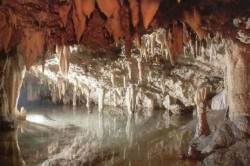 The central and southern parts of Tuscany are famous for the hills covered with gently rye, vineyards, olive yards and forests. But Tuscany, as always, ready to surprise you – several very interesting caves and canyons can be found in the region.

Antro del Corchia. Antro del Corchia (English: The Corchia Cave) is hidden in the territory of Parco delle Alpi Apuane, near the Levigliani di Stazzema village. It is an unusual place, sometimes called „the Empty Mountain“. The cave consists of intricate corridors, wells and grottoes; it has a total length of about 70 km and 1200 m difference in height. Antro del Corchia is considered to be one of the longest and most impressive complexes of the underground world in Italy. MORE.

Grotta del Vento. The Grotta del Vento or Wind Cave under the Apuan Alps is a breathtaking system of caves and. The grotto can be visited in 3 itineraries that vary by length and time, from an hour to 2 hours and all in the company of a tour guide.

Grotte di Equi. The Grotte di Equi is a wide subterranean karst complex in the Lunigiana zone, created during the centuries by the water erosion, with passages, grottos stalactites, galleries, chambers, stalagmites, pools and underground lakes. The Equi Caves system extends for more than 1000 meters and may be subdivided into three parts. Two of them are open to the visitors, and the third part is accessible only to speleologists. MORE.

Grotta del Sassocolato. In the province of Grosseto, near the town of Castell Azzara, Sassocolato cave can be found. The cave is a home to a large colony of bats. Cave can be visited from April to November, two different paths for tourists are available.

Grotta Giusti. Grotta Giusti is a part of Monsummano Terme, famous for its steam baths and hot caves. Here you can admire dark and mysterious tunnels, covered with stalactites and stalagmites. In Giusti Grotto hot underground water springs produce clouds of warm steam and thus create a natural sauna with body cleansing effect.

Grotta Maona. Between the resort towns of Montecatini Terme and Montecatini Alto can be found the Grotta Maona, or warm and humid Maona cave. It is said that it is the only cave in Italy, having two holes – one is the access, and the other – the exit.

Orrido di Botri. Botri Canyon, located near Bagni di Lucca, is a strikingly harsh calcareous canyon with steep walls deeply by the cold waters of the Rio Pelago torrent. Four hour trekking tour through the gorge starts at Ponte a Gaio and finishes at the point known as Piscina, which provides the only access to the gorge, where the visitors’ centre and ticket office are located. The reserve is open from June to September, as that’s when the water flow is low enough to be safe for trekkers and engaging in the sport of canyoning. MORE.

Vie Cave. The Vie Cave are an impressive road network linking an Etruscan necropolis and several settlements in the area between Sovana, Sorano and Pitigliano in Maremma land (southern Tuscany), consisting mainly of trenches excavated as nearly vertical cliffs in tuff, 1-4 meters width and sometimes over 25meters high. The Vie Cave you can find only in one part of the world, Central Italy! MORE.

Parco Archeologico Naturalistico di Belverde. Near the village of Cetona lies the Archaeological Park of Belvedere. It is possible to visit the park the help of a guide, who will guide the visitors through corridors, halls, tunnels, sinkholes formed in the blocks of travertine.