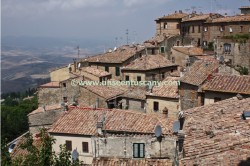 Those, who want to escape from the hustle and bustle of the city and are planning to head to the sea, should make a stop in Volterra – the best rest point in Tuscany. It is a town, located on the top of a high hill – a great place to get acquainted with the Etruscan heritage and alabaster.

The name ‘Volterra’ consists of two Italian words: volare (English: to fly) and terra (English: land), and implies a flying, sliding, collapsing land. Such name is no accident – in the hill slopes of more than 500 meters in height you can see many landslides – it is really a sliding or a flying land. 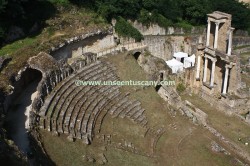 Volterra has been known since the 7th century BC, when it was inhabited by Etruscans, who surrounded the town with the first defensive wall. Etruscans had lived here quite successfully for centuries, being engaged in copper and silver mining, forestry and agriculture – they had lived so successfully that Volterra became one of the richest Etruscan cities. Around the 3rd century AD, the territory was conquered by the Romans, whose signs are seen in Volterra until today. Later it survived the attacks of the barbarians and the Goths, and since the 9th century, due to the Carolingians, Saxons and Franks, Volterra became a rich and privileged city of bishops. In the 14th century there was a fight with Florence, which ended with Volterra’s defeat. And now – it is a unique corner of Tuscany, which you simply have to see yourself.

Volterra, as a true medieval city, was surrounded by a high defensive wall in the 13th century and the only way to get into the old town was to go through several gates in it. The image of Volterra remains unchanged for centuries, and it is influenced by the situation of the town that is absolutely unsuitable for industry or stronger city development. 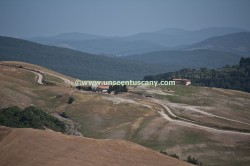 So what should you see in Volterra? First of all, the above-mentioned masonries of the city that provide a beautiful panorama of the vicinities and surround almost entire Volterra. They were built in the 13th century on the remains of former Etruscan masonry. While going along the defensive wall, you cannot miss the residues of Teatro Romano di Vallebuona – it is a preserved part of the Roman theatre with 19 rows for spectators, corridors and some remains of the scene. Of course, there used to be baths as well. All that remained only due to lots of garbage – this archaeological site for many years had been buried under tonnes of rubbish and was excavated only in the middle of the 20th century. 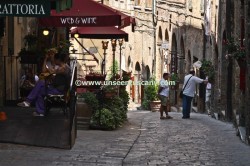 La Piazza dei Priori – the main city square that appeared during the period of bishops’ control (powerful bishops at that time strongly controlled the entire city life: justice, trade, taxes). It is the place where the first palaces and the tower of the city arose, and in the middle of the square, an elm tree was planted, around which the elders gathered for meetings. Currently Palazzo dei Priori, built in 1239, dominates in the square. The palace was once the seat of successive rulers of the city. On the other side of the square there is Palazzo Pretorio with its famous tower ‘Torre del Porcellino’, called the Piglet’s Tower, because of a statue of a little pig on the top of the tower. Some other palaces, situated in the square are Palazzo Vescovile (appeared as a grain warehouse and was later inhabited), Palazzo Incontri, Palazzo del Monte Pio. 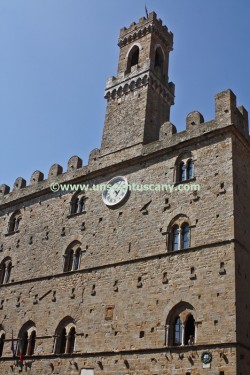 Case-Torri (English: the tower houses) – is one of the most interesting architectural sites in the city. These towers were one of the main symbols of wealth and power in the Middle Ages – the families, who had higher towers, were wealthier and more respected. The towers usually had minimal architectural shapes, small windows and doors that started only from the second floor (for safety reasons) and a strict plan (e.g. a kitchen was always in the upper floor that in case of fire the whole house would not be devastated). One of the most interesting towers of Volterra are Casa-Torre Buonparenti and Buonaguidi, combined together with an arch and a corridor above – the same way as the families that lived there were joined by marriage ties. Casa-Torre Toscano – is a group of several towers, commissioned by Giovanni Toscano, the treasurer of King Renzo di Sardegna in the 1250s.

The Duomo – Volterra cathedral was built in the 12th century instead of former church. The facade of the cathedral is little decorated, whereas its interior impresses with splendour, especially ceilings gleaming with gold. The chapels and the sacristy are lined along the side naves, whereas the octagonal baptistery is built in front of the cathedral as usual. The 15th century bell tower is also separated from the cathedral. 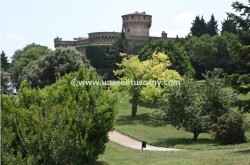 La Fortezza Medicea. In the highest place of the city, a fortress emerged in the 15th century, whose construction works were taken care by the Florentine Lorenzo de Medici.The oldest part of the fortress is the Torre del Mast tower. The fortress was used for defensive purposes and it was also a political prison from the very beginning, where people who were inconvenient to the Medici family spent their days. And even now it remains a prison.

Noteworthy are two Volterra museums: Museo Etrusco Guarnacci and Ecomuseo dell’Alabastro. The latter is located in the old Torre Minucci tower. It tells the story of alabaster from Etruscan times to the present – from the ways of processing to its use and styles of artworks, ranging from economic to social issues, such as market, profession of alabaster processor and workshop activities.

Meanwhile, Museo Etrusco Guarnacci is one of the oldest public museums in Europe – founded in 1761, when the noble researcher Mario Guarnaccia donated approximately 50 thousand books, various material, collected in archaeological researches and a publication about the Etruscans. Perhaps the most interesting object in the museum is ‘Ombra della Sera’ (English: the Shadow of the Evening). It is a bronze statue dating to the 3rd century BC that created a remarkable shadow of a human in the setting sun and reminds a work of modern sculpture. Those, who are interested in the Etruscans, should stop by Acropoli Etrusca and Necropoli (English: the Etruscan Acropolis and Necropolis).