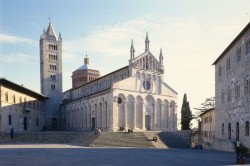 Explore the spectacular beauty of the Tuscan coastal towns and the best Tuscan beaches! Here is our list, check it out.

Massa is a tuscan coastal town located in the Frigido River Valley, near the Alpi Apuane, and some 5 km from the Mediterranian Sea. Most important Massa’s sightseeings are the Malaspina Castle built in 15th century, overlooking the city from a hill, the Renaissance Ducal Palace on the Piazza Aranci and the Cathedral. It’s worth to spend some time in beautiful squares Piazza degli Aranci, Piazza Mercurio and Marina di Massa. And do not forget the Orto Botanico delle Alpi Apuane “Pietro Pellegrini” – a mountain botanical garden maintained by the city. 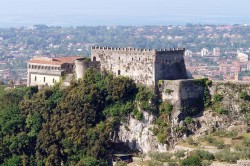 Carrara is a town on the Carrione River, notable for the white or blue-grey marble quarried there. Many sculptures of the Renaissance were carved from Carrara marble. Visiting Carrara don’t miss the 12th century Cathedral of Carrara, nearly all the exterior is covered by local Carrara marble. Another „must see“ is Ducal Palace, known also as Palazzo Cybo Malaspina and built in the 16th century over pre-existing Lombard fortification. Baroque church and convent of San Francesco, built in 1623–64 by order of Carlo I Cybo-Malaspina. Church of the Suffragio, begun in 1686 under design of Innocenzo Bergamini, and refurbished in the 19th century, the façade has a large marble portal in Baroque style. 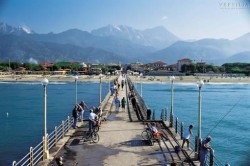 Forte dei Marmi is a sea town in northern Tuscany, its name means “Fort of the marbles”. The town takes the name from the fortress that rises in the middle of the main square. The fortress was built to defend the coast from outer attacks, but in the 19th and the beginning of the 20th century it became the place where the marble quarried from the Alpi Apuane (they are the same mountains of the famous marble of Carrara) was stocked before being sent to the pier for shipping. The fortress is the main sight of Forte dei Marmi, now it is a museum of satirical art. You should visit also at least one of historical bar, clubs and restaurants (for example Ristorante “Bambaissa”, La Capannina di Franceschi, Caffè “Morin”, Caffè “Principe”, Caffè “Roma”, Caffè “Milano”, Ristorante “Gilda”, Bar “Giardino”, Pizzeria “Alessio”, Pizzeria “Da Valè”). 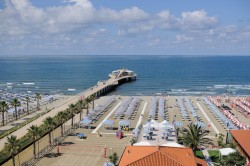 Lido di Camaiore, is a charming sea town in northern Tuscany, which extends from the beach in Lido di Camaiore, to the peaks of the Alps. Lido di Camaiore is characterized by the presence of many villas surrounded by parks, by wide roads, by beautiful squares with artistic fountains and gardens in the nearby of the sea. Most notable monuments of the town are: Villa Borbone delle Pianore, Chiesa dell’Immacolata Concezione e di San Lazzaro, Pieve di Santo Stefano and Teatro dell’Olivo. And do not forget to dedicate one for Luna Park of Lido di Camaiore. But the most important reason to visit Lido di Camaiore is its beaches, that have become famous for the its fine and golden sand and for its inland. You will never forget an incomparable scenery with its fertile hills and the peaks of the Apuan Alps standing out in the deep blue sky. The seaside equipments are the most modern and functional. 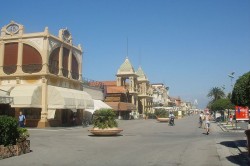 Elegant and very refined bathing Versilia resort, Viareggio (also called the “Pearl of the Tyrrhenian”), is a world-famous tourist destination. The city traces its roots back to the first half of the 16th century when it became the only gate to the sea for the Republic of Lucca. The oldest building in Viareggio, known as Torre Matilde, dates back to this time and was built by the Lucchesi in 1541 as a defensive fortification to fight the constant menace of corsair incursions. Viareggio is known as a seaside resort as well as being the home of the famous Carnival of Viareggio (dating back to 1873), and its papier-mâché floats, which (since 1925), parade along the promenade known as “Passeggiata a mare”, in the weeks preceding Easter. 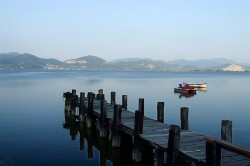 Torre del Lago is a small town between the Lake of Massaciuccoli and the Tyrrhenian Sea and well–known bathing resort of Versilia. The area of the village on the sea, Marina di Torre del Lago, is well known for being an important gay and gay-friendly summer resort of national and international appeal. Torre del Lago is famous also for Puccini’s Opera Festival, where the famous Italian opera’s author Giacomo Puccini, lived for a period and composed many of his works. 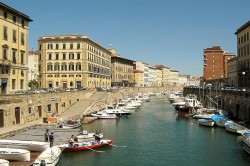 Livorno or Leghorn is a port city on the Tuscan coast, founded in 1017 as one of the small coastal fortresses protecting Pisa, but in 1421 it was sold to Florence. There are so many things to see and to do in Livorno! One of the most charming areas of the city that should be visited is the New Venice district where you can find bridges, narrow lanes, the noblemen’s houses and a dense network of canals that once served to link its warehouses to the port. Another main sights are during the 18th and 19th centuries built neo-classical buildings, public parks housing important museums and cultural institutions, the market, and “Liberty” villas with sea views. And the last proposal for your tour – Fortezza Nuova, built during the Medici years, and defended the city from attack by pirates. By the way, you cant leave Livorno without tasting some local specialities! Cacciucco is the most famous dish of all, a rich fish tomato-based stew cooked with numerous types of locally-caught fish and shellfish, which is said to represent the diversity of Livorno’s people. 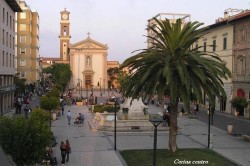 Cecina is a sea town in central Tuscany. A settlement was founded here by the Roman consul Albinus Caecina, who was a descendent of an ancient Etruscan family. After the fall of the Western Roman Empire, the territory suffered a long period of decline, which only came to an end when the Grand Duke Leopold II of Tuscany began to develop local agriculture. An archaeological park close to the town houses the remains of a Roman villa from the 1st century BC. 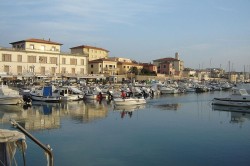 San Vincenzo is a coastal town and it is one of the best equipped touristic centers of the central Tuscany coastal areas. The town is placed where the Metal Hills reach the sea, forming a trait that links the plain of the river Cecina with the plain of the river Cornia. San Vincenzo beach of fine white sand runs for ten kilometers and is surrounded by thick Mediterranean woods that reach directly to the sea. 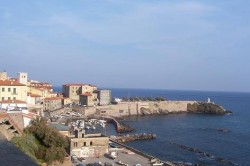 Piombino lies in front of Elba Island and at the northern side of Maremma. It has an ancient historical center, derived from the time in which it was the Etruscans’ port, in the surroundings of Populonia. Piombino has to offer a lot of mediaval sights: the Rivellino or Walls Tower-Gate is the most ancient monument in the city built in 1212. The Cassero Pisano or the Castle is formed by two distinct building, the Fortressand the Cassero. Chiesa della Misericordia, church built in early 13th century, it houses a precious 15th century crucifix. Cathedral of Sant’Antimo (c. 1377), built by the Augustinians and originally dedicated to St. Michael is in Pisane-Gothic style. 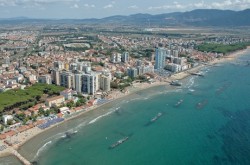 Follonica is based on the Gulf of Follonica (Golfo di Follonica), about 40 kilometres northwest of the city of Grosseto. Follonica is a popular tourist site during the summer, mostly visited by the Italians themselves. The city has been awarded the Bandiera Blu (“Blue Flag”) every year from 2000 to 2007 for the cleanliness of its beaches and seawater. 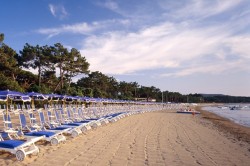 Punta Ala is a famous seaside resort which lies on the northern slopes of promontory of the same name. The town is famous for its sailing regattas which are held by the local “Punta Ala Yacht Club” and the well equipped tourist port, the home of Luna Rossa. The place is a tourist destination of elites in every season, thanks to its luxury residences, second homes and boats moored at the port. Monuments: the castle, the Hidalgo Tower, the Isolotto dello Sparviero (Sparviero Isle) with the Appiani Tower. 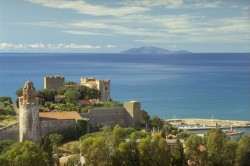 Castiglione della Pescaia is an ancient seaside town. The modern city grew around a medieval fortress and a large fishery, from which it got its designation. Today Castiglione della Pescaia is known for its beaches and has become a center of international tourism. The most notable attraction are the ancient remains in Vetulonia, one of the leading Etruscan cities, and Natural Reserve of Diaccia Botrona. 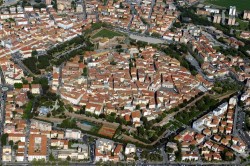 Grosseto is the most populous city in Maremma territory, its origins can be traced back to the High Middle Ages. It is the agricultural capital of the Maremma and is known for its sun-ripened tomatoes, artichokes, mushrooms, spinach, olives and wild boar. Main sights: the Medicean Walls, the Cathedral and the campanille, Piazza Dante, Grosseto, Palazzo Aldobrandeschi, the Etruscan site of Roselle and many more. 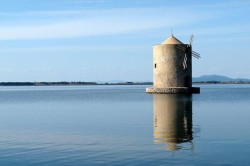 Orbetello town is located on the eponymous lagoon, which is home to an important Natural Reserve. Orbetello was an ancient Etruscan settlement, which in 280 BC passed under the control of the Romans. Main sights: the city walls (5th century BC); Cathedral of Santa Maria Assunta, built over an Etruscan-Roman temple and restructured in 1375 along Tuscan-Gothic lines; the Spanish Forte delle Saline, in the frazione of Albinia; remains of the Roman city of Cosa in the frazione of Ansedonia; ruins of the Monastery of Sant’Angelo.