There are many books written about the Palio di Siena horse races; the process of preparation to it and a variety of its ceremonies is as important as the racing itself. This event is not intended for tourists, these are the century-old traditions (some rules have not changed since the first race in 1644); it is a matter of honour, the most important event of the year, which requires long months and sometimes an entire year of preparation. So it is simply a must to see the Palio during a trip to Siena!

In Middle Ages a lot of competitions and games, including the horse races, took place in Siena. Most of events and city’s fiestas were accompanied by ornate processions, allegorical figures and massive platforms. Eventually, games became not only the privilege of the nobility, but also the tradition and entertainment of the whole city. 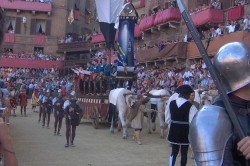 The word ‘palio’ is used not only in Siena, but also in entire Italy defining the horse races of a similar type, and literally it means a reward (it is derived from the Latin word ‘pallium’ – a wool coat). Currently palio is a tapestry banner that goes to the church of the winning city quarter (which is later very often used as altar decoration).

The Palio di Siena race was initiated in the 1555s in honour of the Virgin Mary, who rescued the city from enemies. Among other ceremonies, Palio di Siena was introduced during the festival. That Palio differed from others, because it was attended by citizens from different city areas and ordinary city dwellers, but not the nobility. The horse races were held in the Piazza del Campo square, rather than in city streets, as it was usual earlier. And since 1701, the second Palio on August 16 (as the 14th and 15th were already ‘occupied’ with other events) was added.

Siena is divided into 17 blocks (Italian: contrada), which has remained unchanged since 1729. Each contrada is like a tiny city within a city. Each contrada has a church and the premises for storing contrada symbols (flags, an archive, and etc.). The titles of contadas are really impressive – ‘Dragon’, ‘Wave’, ‘Snail’, ‘Giraffe’, ‘Owl’, ‘Unicorn’, etc. Each one has its own symbol, a slogan, a lot of incredible stories, anecdotes and, of course, perfectly groomed horse.

On the eve of the Palio, each contrada holds the dinner of the whole community to which all city guests are invited (the ticket costs about 10 Euro). Usually this celebration takes place in the open air and all participants can have a solid meal of Italian cuisine made right here. This is a unique opportunity to take part in a real and natural city life! 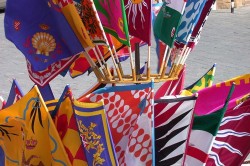 The morning of the competition begins with the special mass, followed by the last workouts, and after that every condtrada elects a jockey and a costume that he will wear during the races. After lunch, the horses and riders are blessed and a solemn parade of costumed people, standard-bearers and representatives of the local government moves to the crowded Piazza del Campo square. The square for the races is prepared very simply – the audience settles down in the middle and, along the perimeter of the square, a racecourse is built – a wooden wall separate the audience from horses, and the pavement is covered with a thick layer of ground. The races start at 19:00 and the jockeys compete for just a few minutes – they have to make three laps, which is not such an easy task – the jockeys ride bareback without any saddles, horses are slipping and very often fall down.