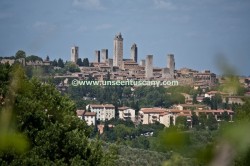 Vernaccia di San Gimignano is one of the oldest Italian wines, whose history is inseparable from the incredibly beautiful and interesting town of San Gimignano. It is believed that the cultivation of vines was introduced to the town precincts in the 13th century from the Ligurian region, adjacent to Tuscany. Later documents note that everyone, who lived outside San Gimignano and its vicinities, had to pay additional taxes if they purchased the white wine, produced in this area. Thus, even in the Middle Ages Vernaccia wine was in great request. It is absolutely confirmed by Dante Alighieri, who also referred to this particular wine in his ‘Divine Comedy’, and by Michelangelo, who mentioned this ‘extremely refreshing’ drink in his notes. The great wine connoisseur and lover Pope Paul III insistently made demands on San Gimignano dwellers to devote less attention on art and science, but to cultivate wine more intently (‘it is a perfect drink for lords, and it is a great sin that this land no more makes it’). 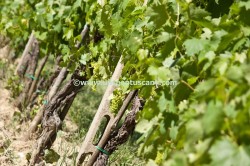 After the end of the Middle Ages and the Renaissance, Vernaccia production stops and revives only after the Second World War. Winegrowers suddenly remember old local wine-making traditions and revive them very successfully in 1993. Vernaccia di San Gimignano wine is awarded DOCG (Italian: Denominazione di Origine Controllata e Garantita, i.e. a guarantee that the wine is produced confirming very strict requirements and only in a certain area).

Vernaccia wine usually has yellow colour with gold shades, which become apparent in the maturation of the wine. The smell is fresh and fruity; the taste is harmonious, dry, having a sense of fruits and almonds. It is perfect with fish, white meat and vegetables.