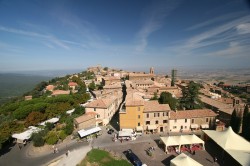 40 km to south from Siena, on a high hill, surrounded by forests and vineyards there is a town of Montalcino that savours of tranquillity and antiquity. Its environs are included in UNESCO’s World Heritage List. A strange story is told about the origin of the name of Montalcino. It is believed that Montalcino was named after the hill Mons Lucini on which the town is situated. This hill was dedicated to the Roman goddess Juno. Whereas others claim that the name of the town derives from Mons Ilcinus – the name of trees that surround the area. This theory is much more realistic, because it is the tree that is represented in the coat of arms of Montalcino. 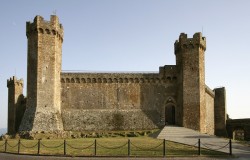 As well as nearby Montepulciano, Montalcino and its wine are known since Etruscan times. Until the 16th century, Montalcino suffered from ongoing battles; therefore it built mighty stone walls and a castle. Most of documents, extant from this period, mention the wine of an excellent quality, produced in Montalcino and its environs. For years Brunello wine was a delight, limited to the local rich. However, in 1980, after receiving DOCG status (Italian: Denominazione di Origine Controllata e Garantita, i.e. a guarantee that the wine is produced confirming very strict requirements and only in a certain area), the situation has changed – Brunello di Montalcino became a worldwide symbol of quality and taste, an excellent example of ‘made in Italy’. In 1999 one of the most prestigious wine magazines ‘Wine Specator’ declared Brunello di Montalcino one of the top 12 best wines of the 20th century.

Brunello di Montalcino is made from Sangiovese grapes (80% minimum) that are called ‘brunello’ in Montalcino localities. Before bottling the wine must age in oak barrels for two years and at least four months it spends in bottles. The wine of Riserva type is released to the market only after 5 years. Interestingly, the wine can only be sold, if it is poured into the bottles of a certain type that is called bordolese (these bottles appeared in Bordeaux region, they are made of thin glass with short necks and ‘sharp’ shoulders; in case of a red wine, bottles are usually brown or green). 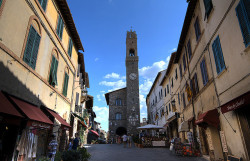 The wine of Brunello di Montalcino is quite thick, it has a rich garnet colour and a strong smell of wood, forest berries and a trace of vanilla. Brunello wine is great for ageing and with years it only gets better – the wine can stay in the bottle from 10 to 30 years, and sometimes even longer. Of course, proper conditions are necessary for its maturation – a cool cellar, darkness, silence and no extraneous odours; the bottles should be stored in recumbent position.